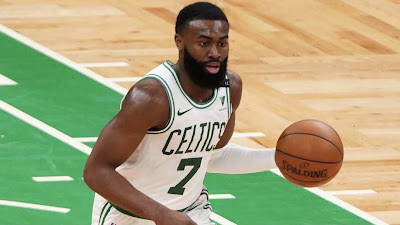 While the Celtics were in the middle of losing to the Cleveland Cavaliers on Wednesday night, All-Star Jaylen Brown posted a picture on social media of his arm and cast in a sling.
The photo, that has since gone viral, showed Brown in good spirits following successful season-ending surgery to repair a torn ligament in his wrist.

"Every report out of his surgery is very positive," Brad Stevens said after the Celtics 102-94 loss in Cleveland.

The Celtics announced that Brown would miss the remainder of the season earlier this week after a scan revealed a torn scapholunate ligament in his left wrist — the same injury Romeo Langford suffered last season in the Disney bubble. Although the tear was not Langford's shooting hand, he still missed five months -- unlike Brown.

It appears that the tear occurred some time in mid-April, although Brad Stevens said not even Brown could exactly tell when he sustained the injury.

"The training staff we have and the medical staff we have does a terrific job," Stevens said Tuesday in his pregame comments. "They're on it, and they keep that open line of communication with the players. I think Jaylen and everybody else would second that."

In his first season has an All-Star, Brown is averaging a career-high with 24.7 points, 6.0 rebounds, 3.4 assists, while shooting 48.4 % from the field and 39.7% from 3-point range in 58 games played.
The Celtics also announced on Thursday that Brown is expected to return to basketball related activities in roughly three months.

"Obviously you feel for Jaylen, he had a great year," Stevens said. "He's such an important part of us in the here and now and as we move forward. We're all encouraged that he's going to be fine after the surgery and will recover 110 percent."