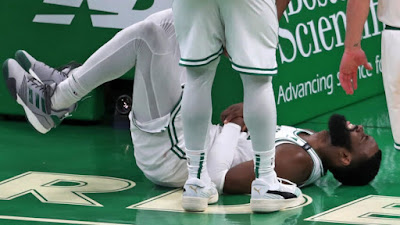 Celtics All-Star Jaylen Brown will miss the remainder of the season with a torn ligament in his left wrist, the team announced on Monday.
Brown will require surgery to repair a torn scapholunate ligament, which is set to take place later this week, according to the Celtics.

#NEBHInjuryReport This past weekend Celtics forward Jaylen Brown was diagnosed with a torn scapholunate ligament in his left wrist. Brown is expected to have the torn ligament surgically repaired later this week, and will be out for the remainder of the 2020-21 season.

Brown is averaging career-highs in points (24.7), rebounds (6.0) and assist (3.4), while playing 58 games this season and made his first All-Star game back in February. He missed the Celtics' last three outings with a sprained right ankle.
Romeo Langford suffered the same injury last September that also required surgery. He didn't play his first game this season until early April.
The Celtics, who have lost three our the last four, host the Miami Heat Tuesday night with the season series on the line at 1-1.