Report: Paul Pierce to be inducted into Basketball Hall-of-Fame Class of 2021 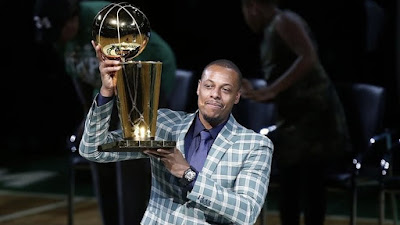 Paul Pierce reportedly will be the next Celtics legend to officially be inducted into the Naismith Memorial Basketball Hall of Fame.
According to Gary Washburn of the Boston Globe, Pierce's induction into the Hall-of-Fame class of 2021 will be announced on Sunday morning. "The Truth" becomes the third member of the Celtics 'Big-3' that won the 2008 NBA championship to be inducted after Ray Allen (2018) and Kevin Garnett (2020).
Pierce, 43, was drafted by the Celtics out of Kansas with the No. 10th overall pick in the 1998 NBA Draft. The 10-time All-Star played 15 seasons in Boston and is the second all-time leading scorer in franchise history.
In 2013, Pierce and Garnett were sent to the Brooklyn Nets in a blockbuster trade that ended the new Big-3 era and began the Celtics rebuild. Pierce went on to play four more seasons in the NBA with the Nets, Washington Wizards, and Los Angeles Clippers before Danny Ainge signed him to a one-day deal so he could retire a Celtic.
Joining Pierce in the same induction class will be Chris Bosh, Chris Webber, Ben Wallace, Rick Adelman, Jay Wright, Bill Russell (as a coach), Yolanda Griffin and Lauren Jackson.