Evan Fournier discusses playing with lingering effects of COVID-19, says 'It's like I have a concussion' 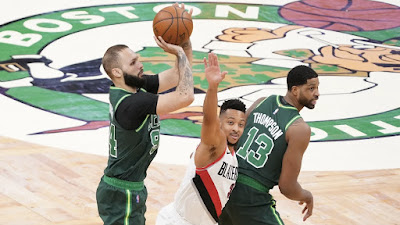 Evan Fournier finally had the breakout performance he'd been waiting for since returning from a bout with COVID-19, in the Celtics' 129-119 loss to the Portland Trail Blazers.
Despite not getting the win, Fournier finished with 21 points on 8-of-10 shooting (5-of-7 from 3), five rebounds and three assists in 34 minutes as a starter.
The veteran guard was acquired from the Orlando Magic just hours before the NBA trade deadline, and as he was just starting to get into a groove with his new teammates before being put into the league's health and safety protocol for nearly three weeks. Fournier opened up about the linger effects of the coronavirus following Sunday night's defeat.

"I've been feeling really weird, to be honest," Fournier confessed. "It's like I have a concussion."
"Right now, it's actually doing a little bit better," Fournier continued. "But at first it's like the bright lights, were bothering my eyes and my vision was blurry and everything was just going too fast for me. And, I mean, it's still the case. Some stuff [is] better. But at times, I’m really struggling to focus and my eyes keep struggling to focus on one thing. My depth perception is really bad right now. But I saw a specialist. She gave me some exercises. And hopefully, I'll get better."

Similar to Tatum, who recently admitted to using an inhaler before games after being cleared to return to basketball, Fournier didn't know what to expect once returning to playing in games.

"That's the thing with this COVID thing," Fournier said. "The truth is that doctors and everyone, they really have no idea [about COVID effects]. You know, it's so new. And the stuff that I'm feeling, apparently one third of the people after COVID got those symptoms as well. So it’s not an isolated case. But like I said, with time, it's going to get better. Some people lost their taste of the food and the smell. And me, I’m guessing it's just my awareness and all that, it's part of the senses. But it's going to get better. It's already slightly better. So, like I said, I'm going to keep working. But I can't just take games off or practice off because I'm not feeling well mentally. If my body's available, I have to be available."

In the five games prior to facing the Blazers, Fournier was averaging 4.6 points on 18.5% shooting, 14.4% from behind the arc, 3.6 rebounds and 1.8 assists per contest -- which included three starts.
When asked about any potential long-term effects and giving a rough timeline on his recovery, Fournier remained positive that he's not worried about that and he's focused on getting back into form with his teammates.

"I'm not overly concerned for my health because I know in time it's going to get better, and I have no doubt that I’ll be good," said Fournier. "It's just very unfortunate, the timing of things. Obviously I'm new here, so people don't really know my game and know who I am. It's just terrible timing. I get here and we have expectations, trying to make a run. For the first time in my career, to have an opportunity to make a really deep run into the playoffs with a team. So it's kind of a golden opportunity for me to finally be with a great team, and the fact that I got COVID and now I'm feeling like this, it's heartbreaking to be honest.
"So that's the hard part, but you guys don't know me yet," Fournier concluded. "I'm mentally as tough as it gets, and I'll get through that."

Fournier will travel to Orlando for the first time since being dealt to the Celtics, when they face the Magic on Wednesday night.