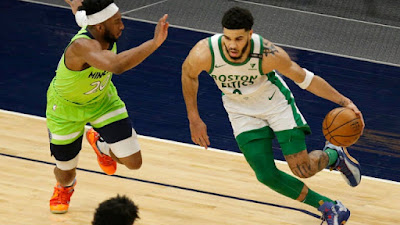 Jayson Tatum led the shorthanded Celtics in a 124-108 blowout win over the Minnesota Timberwolves Saturday afternoon at the Target Center.
The two franchises squared off on the same day that superstar forward Kevin Garnett was being inducted into the Naismith Basketball Hall-of-Fame. "The Big Ticket" played his first 12 seasons with the T-Wolves before being traded to the C's just prior to the 2007-08 season -- where he won his first and only championship.

"Obviously different personalities and positions, but I've always admired and respected him," Tatum told NBC Sports Boston after the game.

Garnett spent six years in Boston before being dealt to the Brooklyn Nets and eventually made his way back to where it all started before hanging them up after 19-seasons.

"Congratulations to him and his career, and all he accomplished," Tatum said. "Obviously, it's well deserved."

Tatum finished with 26 points, 11 rebounds against Garnett's former team, while Evan Fournier added 18 points (shooting 5-of-8 from 3) to help snap the Celtics' four-game skid. Tremont Waters chipped in 14 points and seven assists off the bench.
Boston was playing without Kemba Walker (neck), Tristan Thompson (pectoral), Marcus Smart (calf), Robert Williams (toe) and of course Jaylen Brown -- who had season-ending surgery this week to repair a torn ligament in his left wrist.
The Celtics had their 23-point lead cut to 11 in the fourth quarter that forced Brad Stevens to insert Tatum and Fournier back into game.

"We needed to feel good," Stevens said. "I thought it was really important when we step on this plane today to feel a little bit better about the win with the right mentality."

Karl-Anthony Towns led Minnesota with 24 points and 14 rebounds, while rookie Anthony Edwards scored 23 points in the Timberwolves (22-49) second straight loss.
The Celtics took a 66-47 advantage into the break, as they connected on 13-of-30 from deep and held the T-Wolves to just 2-of-17 from 3-point range in the first half.
Boston pushed their lead 81-58 with 5:34 left in the third quarter following a Luke Kornet (12 points) dunk -- the largest margin of the night.
It didn't get much better for Minnesota from behind the arc as they finished 3-of-20 in the second half and 5-of-37 overall for 13.5% on 3-pointers.
The Celtics shot 48.4% from the field and 18-of-42 on made 3's, despite getting outscored in the paint by the Timberwolves 68-50.
Boston has secured the No. 7 seed at 36-35 with one more to play before facing either the Washington Wizards or Charlotte Hornets (both tied at 33-38) -- who will play each other on Sunday to decide the No. 8 seed for the "Play-In Tournament."
In the meantime, the Celtics head to New York to take on the Knicks (40-31) in their season finale Sunday afternoon. ESPN has the tip-off at 1:00 PM EST.

The Celtics handed out 27 assists on 46 made buckets and the Timberwolves dished out 22 dimes on 39 made shots. Boston loss the battle off the glass 51-44 and committed 15 turnovers to Minnesota's 13.