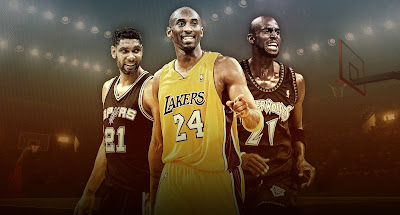 The Naismith Memorial Basketball Hall-of-Fame has officially pushed this year's induction ceremony to 2021, because of the COVID-19 pandemic.

Jerry Colangelo, who is the chairman of the board of governors for the Hall-of-Fame, told ESPN on Wednesday that the enshrinement ceremonies for the Class of 2020 -- one of the most anticipated ever, including Kobe Bryant, Tim Duncan and Kevin Garnett -- will be postponed to the spring of 2021.

The Boston Globe reported earlier this week that the celebration, which was originally scheduled for the weekend of August 28-30, was already looking for an alternate date (Oct. 9-11) and venue for social distancing purposes. But according to Colangelo, that's "just not feasible," as the board of governors will meet again on June 10 to explore plans for next year.


"We're definitely canceling," Colangelo said. "It's going to have to be the first quarter of next year. We'll meet in a couple of weeks and look at the options of how and when and where."

With the coronavirus that has killed more than 100,000 people in the United States, large gathering events throughout the summer and fall have been canceled or moved.

The Basketball Hall-of-Fame, located in Springfield, Massachusetts, would have used this year's induction ceremony as a chance to show off its $23 million renovation project after it closed in early February with plans to reopen on March 25, but due to the pandemic, its doors have remained shut.

Hall-of-Fame rings and jackets were set to be presented to the inductees at Mohegan Sun casino and resort in Uncasville, Connecticut on a Friday, while the induction ceremony was scheduled for August 29 at Symphony Hall in Springfield -- which seats 2,611.

John Dolvea, Hall-of-Fame CEO said officials also considered moving the enshrinement ceremony from Symphony Hall to the MassMutal Center in Springfield, which seats a capacity of 8,319 people but decided to move the date to 2021 instead.

The decision to delay the event is mainly because there's an importance of an audience being present and not turn it into a virtual ceremony, especially due to the emotions surrounding this class and Bryant's death this past January.


"We won't be combining them," he said. "The Class of 2020 is a very special class and deserves its own celebration."