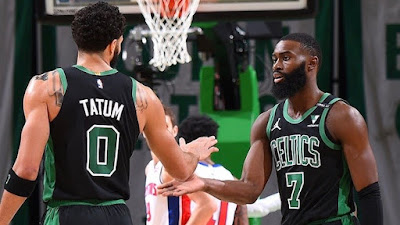 Celtics forward Jayson Tatum and guard Jaylen Brown are heading to this year's All-Star Game in Atlanta on March 7 as reserves, the NBA announced Tuesday night.
Brown, who's making his first All-Star appearance, is averaging a career-high 25.5 points per game on 49.7% shooting from the field, 40.9% from deep and 76.6% from the free throw line, along with 5.5 rebounds and 3.9 assists.
Tatum makes his second straight All-Star bid, despite his bout with COVID-19, he's averaging 26 points per contest on 44.8% from the floor, 39% from 3 and 86.8% from the charity stripe. Plus, not only his he scoring a career-best in points, he's grabbing 7.1 rebounds and dishing out 4.6 assists which are also career-highs.


Though the Celtics have struggled through their first 30 games of the season (15-15), they join the Nets, and Sixers as the only teams in the Eastern Conference to have multiple All-Stars.
The rest of the East reserves include James Harden, Zach LaVine, Ben Simmons, Nikola Vucevic, and Julius Randle. The starters were announced last Thursday: Kyrie Irving, Bradley Beal, Joel Embiid, Kevin Durant and Giannis Antetokounmpo.
The Western Conference starters are: Stephen Curry, LeBron James, Luka Doncic, Kawhi Leonard and Nikola Jokic. The West reserves include Chris Paul, Paul George, Damian Lillard, Donovan Mitchell, Rudy Gobert, Zion Williamson and Anthony Davis.

Team Captains @KingJames and @KDTrey5 will select from the #NBAAllStar player pool in the NBA All-Star 2021 Draft Show!

Tatum (22) and Brown (24) are just the second pair of C's teammates to get selected to the All-Star Game under the age of 25 since 1953, according to Celtics Stats, while Tatum becomes the youngest in franchise history to receive multiple selections (22-years, 357 days).
Joel Pavón
Follow @Joe1_CSP