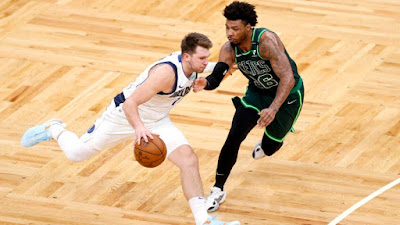 The Celtics had very little answers for Luka Doncic, as their fourth quarter rally fell short once again in a 113-108 loss to the Dallas Mavericks Wednesday night at TD Garden.
The Mavs' All-Star shot 11-of-15 from the field, including hitting 7-of-11 from deep to finish with a game-high 36 points, to go along with eight rebounds and five assists to hand Boston their second straight loss.
Jalen Brunson scored 21 points off the bench and Kristaps Porzingis added 19 points, eight rebounds to lead the Mavericks, who are now 25-21 after winning their second in a row.
Jayson Tatum netted 25 points and grabbed nine rebounds, Jaylen Brown had 24 points on 9-of-17 from the floor and Kemba Walker recorded 22 points, six assists for the Celtics that are now 23-25 on the season.
Boston never led once and trailed by 23 points in the third quarter before they rallied to cut the deficit to single digits in the fourth, forcing the Mavericks to commit six of their 20 turnover in the final frame.
Dallas led 104-98 before Doncic was fouled attempting a 3-pointer with 56 seconds left to play. Despite Doncic sinking two of three from the free throw line, the Celtics remained aggressive and got within 109-107 on a Marcus Smart tip-in of a Tatum missed layup.
Boston quickly fouled Brunson, as he calmly hit both free throws with 11.3 seconds left. Smart (17 points, seven assists) was fouled grabbing an offensive rebound on a Brown missed 3-pointer. The veteran Celtics guard made the first freebee and tried to miss the second one on purpose but the ball bounced off the glass and it didn't touch the rim.
Coach Brad Stevens seemed frustrated once again, as his team had to play catch-up and failed to complete another comeback down the stretch.

"We've got to respond better in the middle of a game. And we just haven't," Stevens said in his postgame presser.

While Brown was back in the lineup after missing Monday's loss to the New Orleans Pelicans, Robert Williams III was a late scratch before Wednesday night's tip-off against the Mavs.
For a second straight game since fans have been welcomed back to TD Garden, the Celtics heard boos rain down from the stands multiple times.
Dallas used a 20-5 run to take 61-39 lead late in the second quarter, hitting back-to-back-to-back 3s right before the end of the first half. At intermission Doncic had connected on 8-of-9 shots (5-of-6 from 3), scoring 24 points.
The Celtics are back at it on Friday night when they host the 13-34 Houston Rockets. Tip-off is at 7:30 PM EST.
Game Notes:
Celtics hit 41.5% of their shots and went 11-of-47 from behind the arc (23.4%), while the Mavericks were 38-of-77 (49.4%) from the field and 48.7% from 3, connecting on 19-of-23 (13 in the first half). Boston was out-rebounded 43-36, but outscored Dallas 50-30 in the paint. Both teams finished with 20 assists respectively and the C's only turned the ball over nine times.
Joel Pavón
Follow @Joe1_CSP