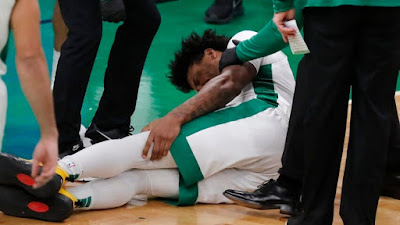 Celtics guard Marcus Smart spoke to the media on Friday for the first time since his calf injury in a loss to the Los Angeles Lakers last month.
Smart told reporters, before the Celtics hosted the Detroit Pistons, that he's making progress from the torn calf in his left leg that has caused him to miss the previous seven games. Though he was seen walking with a slight limp, Smart has been able to jog lightly and some basketball movements.

"My body is definitely healing the way we expected it to," said Smart, who was projected to miss 2-3 weeks after the Jan. 31 injury. "But it's definitely going to take some time."

The veteran guard said the injury did not occur due to contact with Lakers forward Montrezl Harrell underneath the basket. Instead, Smart says he felt a pair of pops in his leg when he planted and again when he stepped to jump.

"When I stepped back with my left foot after blocking the original shot by Montrezl, when I went to gather, I planted and put all the pressure to load to jump, my calf literally popped," Smart said. "I felt it, I heard it. Then when I stepped forward to jump and when I went to plant to jump up to try to contest his shot the second time, it popped again. That pop just really sent this burning painful sensation down my whole leg.
"So thank God it wasn't my Achilles, anything worse. Thankful for that. Still hurts like hell, but like I said, blessed it was nothing worse."

Though according to Smart, said there's "no real timeline" yet for his return to action, the Celtics guard is taking it day-by-day.

"It's tough just because being hurt, the whole process, it takes time," Smart said. "As a player, as a competitor, you obviously want it to be faster, but it doesn’t happen that way. You have to listen to your body and let your body do what it does."

Smart said despite walking with a limp, he's still able to push pressure on his left leg.

"We're doing light basketball activities right now," Smart said. "Nothing crazy. I'm steady able to get my shots up. I'm able to run a little bit off it, not as much. I'm probably, I would say, 30- to 40-percent running-wise. But just mostly doing a lot of testing, getting my calf stronger and doing a lot of calf raises and things of that nature to strengthen it, and just getting ready to hopefully get to the standpoint of stage 3 or 4 where I’m full-court running and really just going all out to really test this thing."

The Celtics guard also added that he is "making strides."

"We were definitely ahead of schedule then what we thought we would be with the type of injury," Smart said. "Definitely have a ways to go, but we're headed in the right direction."