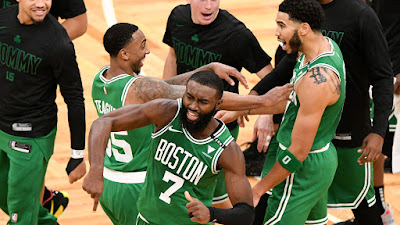 It took a fallaway, go-ahead 3-pointer and a missed free throw on the opposite end in the final moments Friday night, to give the Celtics a 122-121 win over the Milwaukee Bucks in their season opener.
If there was a crowd at the TD Garden, the arena would have erupted following Jayson Tatum's bank 3 off the backboard over the reigning Defensive Player of the Year Giannis Antetokounmpo's reach, leaving 0.4 seconds remaining on the game clock.
But it was Antetokounmpo, who is also the current league MVP, that had a golden opportunity to possibly send it to overtime at the free throw line -- only to make the first and miss the second freebee and fall to the Celtics.

"Ever since I was a kid, I always wanted to be in that position," said Tatum on what turned out to be the game-winning shot. "If it goes down or not, that's what I work so hard for. You just want to be in that moment."

Though Tatum didn't plan to hit glass on that final shot, he finished with 30 points, including going 6-of-13 from behind the arc (12-of-28 overall) and also grabbed seven rebounds.

"Once I let it go I knew it was going to hit the backboard," he added. "But I didn't necessarily try."

Jaylen Brown led the Celtics with 33 points on 13-of-24 made attempts and veteran newcomer Jeff Teague added 19 points, on 7-of-15 shooting from the field (4-of-4 from 3) off the bench. Tristian Thompson chipped in 12 points and eight rebounds in 22 minutes while on a time restriction.
Antetokounmpo had a game-high 35 points to go along with 13 boards before attempting to catch an inbound pass at the rim to tip it in as the last play to tie  the game with 0.4 left, but got fouled. The Bucks' star may have put some pressure on himself to sink the second free throw after making the first, as it bounced off the rim.

"Obviously, there's a bit of a weight on your shoulder because you know if you miss, that's it for your team," said Antetokounmpo, who scored 18 of his 35 points in the final frame. "I'm a winner. I want to do whatever it takes for my team to win. But you learn from every situation that basketball puts you in."

Kris Middleton went 10-of-20 from the floor to net 27 points and take down 14 rebounds. Jrue Holiday scored 25 points and Donte DiVincenzo added 15 points for the Bucks, who are 1-4 against Boston in their last five meetings.
The Celtics trailed 48-39 midway through the second quarter before they used a 10-0 run to take a halftime lead. Boston had a comfortable 101-84 advantage to start the final period, but Antetokounmpo cut the Bucks deficit 109-107 in a two-minute span -- outscoring the Celtics 10-2 in the process.
Despite blowing the double-digit lead, the Celtics never fell behind the rest of the way to start their 2020-21 campaign with a bang.
Coach Brad Stevens will have his work cut out for him when Boston hosts Kyrie Irving, Kevin Durant and the Brooklyn Nets on Christmas Day, as they look to avenge their blowout preseason loss from last week. Tip-off is at 5 p.m. EST on ABC.
Game Notes:
Boston shot 45% (18-40) from 3-point land and assisted 23 times on 48 made baskets, while only committing seven turnovers to the Bucks' 16.
Prior to tip-off, the Celtics paid tribute to legend and icon Tommy Heinsohn, who passed away last month at the age of 86. The team lowered eight of their championship banners courtside, to honor Heinsohn, as he had been apart of the franchise since 1956 as a player, coach and TV commentator.
Joel Pavón
Follow @Joe1_CSP