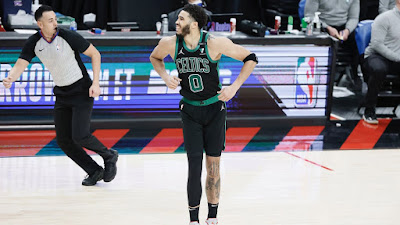 Jayson Tatum continues to deal with the after effects of testing positive for COVID-19 over three months ago and according to the Celtics All-Star, he's been using an inhaler prior to games.
After scoring a team-high 32 points on Tuesday night in a 116-115 road win over the Portland Trail Blazers, Tatum revealed that he feels "close," after being asked if he was near 100 percent.

"Very close. It's a process. It takes a long time. I take an inhaler before the game since I've tested positive," explained Tatum. "This has kind of helped with that and opened up my lungs, and, you know, I never took an inhaler before. So that's something different. I for sure feel better now than I did a month ago."

While Tatum added that he is not sure how long he'll use the inhaler, saying that it will most likely be until he feels good enough to play without it.

"There's no exact timetable," Tatum said. "[It's] just when I feel comfortable enough and I think I don't need it."

Tatum's 10-of-17 shooting performance against the Blazers, including a dagger 3-pointer from the top of the key with 8.5 seconds to play -- that ended up being the game-winner -- is just a series of clutch shots the Celtics' All-Star has hit in his last seven games, that has Boston 6-1 and playing arguably their best basketball during an otherwise inconsistent season.
The Celtics have won four straight (2-0 on their three-game mini west road trip) and are in sole possession of the fifth seed in the Eastern Conference at 29-26.
In the past 10 games, Tatum is averaging 29.4 points while shooting just under 50% from the field and just under 40% from 3-point range -- which includes a career-best and historic 53 points in the Celtics' overtime win over the Minnesota Timberwolves Friday night.
Despite the 23-year-old still feeling the impact of the coronavirus, Tatum knows that he's not the only one on this current Celtics roster trying to overcome hurdles of a condensed season due to a global pandemic.

"I don't think our record shows what kind of team that we are," Tatum said. "I think even though it's been a weird year, obviously we've dealt with some, excuse me, a bunch of things obviously. Stuff, a lot of guys tested positive, certain guys have been injured. But you know right now for the most part, we're missing Evan [Fournier]. But most of the guys, they're healthy. I just like the way that we're playing. Every game is important right now, and we know it's kind of coming down to the stretch.
"Obviously, we want to win. But I think for myself, us, playing the right way and feeling good about ourselves. We're not going to win every game, but I think we're playing the right way and we're for sure trending in the right direction."

It was only seven days ago when ex-Celtic and member of the 2008 championship team had some harsh criticism for Tatum following a disappointing home loss to the Philadelphia 76ers that was nationally televised. Kendrick Perkins had no issues calling out Tatum via his Twitter account for his poor body language.
Apparently, what stemmed from those comments was a one-on-one conversation between the former enforcer on the court -- now turned analyst and the rising young star, according to Perkins.

Since then, the Celtics haven't lost in four games and a huge reason for that is Tatum's 34.5 points average in that span which resulted in East Player of the Week honors, which has Perkins showing appreciation to Tatum's approach and now response in his recent play.

"I appreciate Jayson Tatum because we didn't have a conversation where it was beef," Perkins said. "We had a conversation where he just wanted to understand where I was coming from and I got an understanding of how he felt about my comments. I had to let him know that I was not attacking him personally and that I am a huge fan of his. So, that's how real people conversate and that's how real professionals handle their business, the way that Jayson Tatum is doing – not getting all sensitive."

Tatum did acknowledged that his leadership was coming into question after the Celtics' win over the Timberwolves.

"I know that I’m not the loudest and I don't show much emotion. But anyone who has coached me and knows me knows I'll go to war any day," Tatum told reporters postgame.

Boston looks to extend their win streak and sweep their road trip on Thursday when they face the rival Los Angeles Lakers.