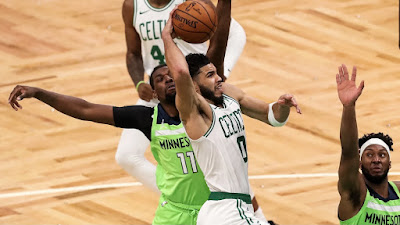 It took an extra five minutes and an historic performance from Jayson Tatum for the Celtics to hold on to a 145-136 overtime win over the Minnesota Timberwolves Friday night at TD Garden.
The All-Star forward shot 16-of-25 from the field, including hitting 6-of-10 from deep and 15-of-16 from the free throw line to finish with a new career-high 53 points to go along with 10 rebounds to lead Boston back above .500 (27-26) for the first time since March 16.
It was Tatum's first 50-point game passing his previous high of 41 after scoring 18 points in the fourth quarter and overtime to help the Celtics win their fourth out of their last five.

"Scoring 50 is a big thing in this league and especially at this age," Tatum said in his postgame comments. "It's a night I will always remember. First 50-point game and we got the win on top of that. Every win right now is big. So we'll take it."

At 23-years-old, Tatum becomes not only the youngest Celtic to score 50, but he's the sixth player to reach that feat in franchise history and the first to do it in a regular season game since Isaiah Thomas back on December 30, 2016.
Jaylen Brown scored 26 points on 9-of-15 shooting and 4-of-9 from 3, while Marcus Smart added 24 points with an efficient 7-of-12 from the floor and 4-of-8 made 3-pointers.
The last time a Celtic scored 53 was Isaiah Thomas in Game 2 of the Eastern Conference semifinals against the Washington Wizards back in 2017. Coach Brad Stevens mentioned how he saw the similarities in Tatum's performance on Friday.

"It was a lot like I recall with Isaiah on so many occasions. He just wouldn't let us lose," Stevens said during his postgame presser. "When we were coming back in the third, you could see he had it."

Karl Anthony Towns led the way for Minnesota with a double-double of his own -- 30 points and 12 rebounds. D'Angelo Russell scored 26 points off the bench, Anthony Edwards netted 24 points and Josh Okogie chipped in 16 points for the Timberwolves, who are now 13-40 and have dropped seven of their last 10.
It looked like it was going to get away from the Celtics early when they trailed 39-25 after the first quarter and 66-57 at halftime. The deficit grew to 17-points in the third before Boston rallied to finally grabbed an 11-point lead with 3:26 left to play in regulation.
The Timberwolves used a 13-2 run in the final 2:41 to send it to overtime, while the Celtics went cold by going 1-of-5 in that stretch while also turning the ball over. With the game tied 124-124 following a Russell bank shot 3 with 8.6 seconds left, Tatum missed a 21-foot step-back jumper to win the game.
In the extra session the Celtics jumped out to a 135-129 advantage after back-to-back made 3's by Kemba Walker (17 points, nine assists, seven rebounds), before Russell responded with a 3-point play. But a Boston 10-4 run in the last 1:44 of OT iced the win, as they ending up outscoring the Timberwolves 21-12 overall in the additional period.
The Celtics are 1-2 in overtime games played this season and wrapped up their seven-game home-stand with a 4-3 record. Tatum mixed scoring output from the perimeter and at the rim in 41 minutes played, while also finding open teammates was key in their comeback win.

"Tatum was super special tonight and that's coming off a heavy minute night the night before," Stevens said. "Don't mistake his quiet demeanor for not being a competitor. He was a competitor."

Boston will head out on a mini road trip out west that starts in Denver against the Nuggets (34-18) on Sunday afternoon. NBATV has the tip-off at 3:00 PM EST.