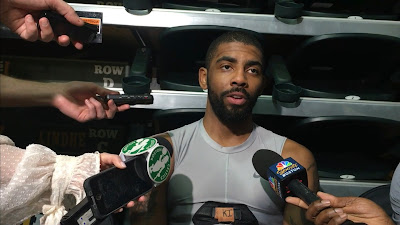 James, the leading (overall) vote-getter in the Eastern Conferance, along with Steph Curry, who received the most votes in the Western Conference, were named captains in the new All-Star format. James drafted Irving as a starter and Love as a reserve on Thursday, bringing together the former Cavs big-three again for the first time since Irving requested to be traded over the summer.

Irving said there will always be a connection with his former Cleveland teammates, especially since they won a championship together.

"I think you've heard it if you've talked to championship winners before, but when you're on a championship team, it's just a bond that can't be broken forever," Irving said. "Just going through that, the way we created history -- we're the only team in history to come back from 3-1. And that's something that will be etched in NBA history for life.

"And that's always a connection, something that we can always reminisce about no matter what. It's an incredible bond that we built as a team, individually being tested at the highest level, and doing something that you can remember for the rest of your life and tell your kids about."

Some speculated if James would pass on Irving, considering how he forced his way out of Cleveland back in August, when he asked to be traded. Irving has led the Celtics to the best record (35-14) in the East, while the Cavaliers sit 6.5 games behind Boston entering Friday night.


"It will be fun [to play with James and Love]," Irving said. "All-Star weekend's just an enjoyable experience. It's a time for us as competitors to get together when we're not necessarily with our teams and going against one another. It's great to see the two captains choose who they felt were the best fit for their team, and I'm glad that I'm playing with a bunch of great players."

On Thursday, a report surfaced that Irving threatened to sit out the season if the Cavs refused to trade him, back in July. Of course the Celtics All-Star shot down the story that he would opt to have knee surgery if the Cavaliers didn't grant his request this past summer.

When asked about the report's suggestion that he might eventually need minor knee surgery, Irving cleverly responded with, "Sounds like a HIPAA violation."

Al Horford was also named an All-Star reserve and was drafted by Steph Curry. The Celtics big man says he likes the new format and hopes the draft will be eventually televised.


"I think it's a great concept," Horford said. "I feel like that the league needed to do something to change it up, and I think this was just the right thing. I think the next thing is that it'll be announced publicly, picking teams and stuff like that."

Horford, a five time All-Star, hopes his Celtics teammate Irving will take it easy on him during the weekend's main event.


"I hope I don't get switched out on him," a smiling Horford said. "Kyrie is known for putting people on skates out there. It'll be fun. I'm looking forward to it."

The NBA All-Star break will take place the weekend of February 16-18.

Here's a look at both All-Star rosters below: 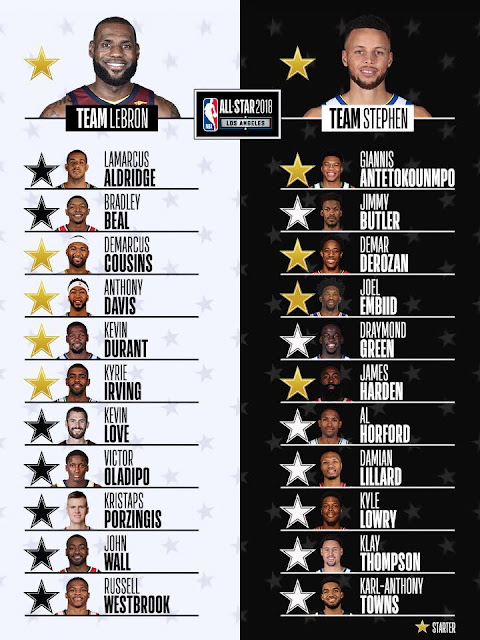