Pelicans 116 - Celtics 113 [OT]: Anthony Davis proves to be too strong in win against Boston 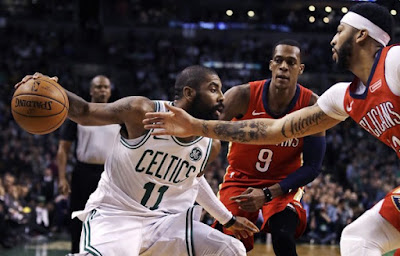 When the Celtics erased two 10-point deficits in the second half and pulled ahead by five points in the final minutes of regulation, it felt like the making of another come from behind win.

Only this time, the tandem of Anthony Davis and DeMarcus Cousins got the best of the Celtics down the stretch -- where the dynamic duo executed on both ends of the floor in a 116-113 overtime thriller over the Celtics at TD Garden.

Led by the dynamic duo's dominant performances, New Orleans demonstrated the formula to beating the Celtics -- force Boston to shoot from the perimeter, take away the driving lanes and control the paint on both ends.

The Pelicans out-rebounded Boston 55-53, scored 50 points in the paint and forced 19 Celtics turnovers (converted into 32 points). Davis finished with a game-high 45 points to go with his 16 rebounds, Cousins also reached a double-double (19 points, 15 rebounds) and Jrue Holiday finished with 23 points, including 3-of-5 from deep.

Davis wasted no time in making his presence felt. He dissected the Celtics' defense down low, drained shots off the dribble and tallied 17 first-quarter points while pulling down six rebounds. He tacked on 25 by halftime, still, the Celtics only trailed by 10.

Boston then came roaring back, opening the second half with an 18-6 run fueled by Kyrie Irving -- who poured in 16 third-quarter points. The Celtics led by three towards at one point before the Pelicans finished the frame strong and pulled ahead.

Boston spent the first three quarters playing catch-up. They teased their fans in the third quarter when they cut a 10-point deficit only to fall behind by 10 again at the start of the final frame.

However, when Brad Stevens turned to Irving with 7:14 left, the Celtics grabbed their first significant lead of the night -- a five-point (101-96) lead when Daniel Theis connected on a 3-pointer with 3:54 left. The Celtics squandered their lead in the final minutes by sending Davis to the free-throw line -- where he went 2-of-3 and left a two-point window for Irving to drive in a game-tying layup that forced overtime.

In the extra period, Davis and Cousins continued to pour it on the home team

Kyrie Irving, who finished with 27 points and 7 rebounds on the night, led six Celtics scoring in double-figures.


"You gotta play the whole way through and tonight, obviously, it's a 53-minute game," Stevens told reporters after the game. "But I'll go back and watch but I'm guessing we didn't defend the way we wanted to for more than 10 or 12 minutes all night. So that was number one, and it kind of puts you in a tough spot. And then, you know, we had a drought there late where we had some good looks that didn't go and we had some possessions that weren't as good."

Boston reached a season-high in 3-pointers attempted (50) and while they did manage to drain 19 of them -- which was also a season-high, the high volume of perimeter shots turned into fool's gold when Irving's potential game-tying 3-pointer clanked off the back rim and into the hands of the Pelicans.

Boston will host the Philadelphia 76ers in a final meeting between these two teams of the 2017-18 campaign and for the second time since their trip to London last week.

TNT will have the tip-off at 7 on Thursday night.

The Celtics shot under 40-percent from the field (40-101), as nearly half of their attempts came from behind the 3-point line. During the game the team announced the passing of Hall-of-Famer Jo Jo White at the age of 71, after a long battle with cancer. The Boston legend was a two-time NBA champion and a seven-time All-Star. His No. 10 was retired by the Celtics in 1982.