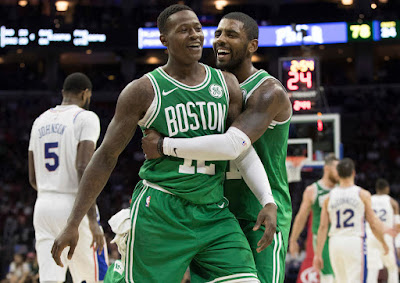 For someone who can put points on the board in a hurry, Rozier has become a reliable scorer for Brad Stevens. He can finish strong at the rim, score from the perimeter and produce off the dribble.

Rozier has even improved defensively, averaging one steal per game while pulling down 4.4 rebounds a night. He can certainly stuff a stat sheet for a guy who plays 23 minutes a night; a prominent second-unit role that he earned this year due to his refined play of late.

One of the biggest reasons for Rozier's newfound confidence has been the acquisition of Kyrie Irving, someone Rozier referred to as a mentor to him and a guy who he wouldn't replace for anyone else to lead a relatively young Celtics team.


"He's just not only there to help me on the court but he's a guy who, mentally helps me on the court," Rozier said. "He's great at what he do as a leader, he's special to this group -- what we got, our goals that we have. Who's better to have than Kyrie Irving leading the pack? That's great for us"


"It's been great, funny, all kinds of different things," Rozier answered. "He's a character, he's a great guy -- not what I thought he would be. I thought that he would be more chill [laid back] but he's a funny guy."

Irving's influence on the court influence is evident in Rozier's approach this season. One of the biggest flaws of his game in the past was his inability to finish strong at the rim at times.

He often had no problem weaving through defenders but converting made field goals while absorbing contact was one of his biggest weaknesses. But as Irving's understudy this season, we've seen a vast improvement.

Rozier is making 50 percent of his attempts in the paint, averaging 9.2 points while shooting 39.6 percent from the field. He's also shooting at a 36.4 percent clip from behind the arc.

Rozier's quick handles and ability to create just enough space to take his well-contested 3-pointers and drain them, are very reminiscent of Irving's outside touch. Coupled with his capability to split defenders, it's no question that having Irving as his teammate has had an impact on the third-year guard.

Click the video below to see more of our exclusive interview with Rozier.