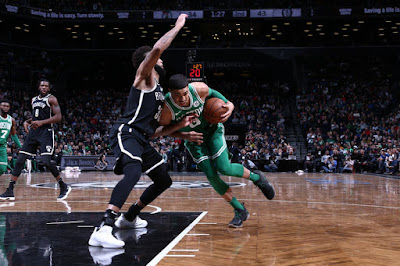 Without Al Horford, the Celtics' defensive anchor, Jayson Tatum stepped into the crucial role Saturday night against the Nets and in the process made NBA history.

Horford, who was ruled out before tip-off due to a sore left knee, was replaced by Marcus Morris in the starting lineup but it was Tatum's defensive stops and back-to-back shots -- the last two Celtics made field goals --  in the final 1:16 that ultimately prevented the Nets from forcing overtime. With 17 seconds left, Brooklyn had four opportunities to even the score but the Celtics held on in an 87-85 win -- their sixth consecutive.

Kyrie Irving found Jayson Tatum for a loud finish down low, then Irving pulled down a critical offensive rebound before finding Tatum for a 3-pointer that made it a two-possession game (87-83) with 45 seconds left. The Nets pulled to within two points before Irving blocked Joe Harris' layup attempt and from there the Celtics came up with stops in what was a scrappy finish in the final seconds of play.

Celtics, coming off their 91-84 win over the Timberwolves, found themselves in another low-scoring affair in Brooklyn. Boston tacked only 16 points in the opening frame but only trailed by six.

Spencer Dinwiddie scored a team-high 20 points, Jahlil Okafor led the bench with a dozen points in 12 minutes while DeMarre Carroll (7 rebounds) and Joe Harris (12 assists) each finished with 10 points.

However, the Celtics went outscored their opponent in the second and third quarter -- they finished a combined plus-9 in both frames. Boston also forced 16 turnovers and a lot of that had to do with their 19-year-old stud.

Tatum swatted a season-high of six blocks to go with his three steals. He became the first teenager since Kevin Garnett to record at least six blocks and three steals in the same game. Garnett, 19 at the time,  finished with six blocks and four steals along wit his 18 points in his rookie season on April 17, 1996.

The Celtics have reached London week. They will cross the pond Monday for their overseas matchup against the 76ers on Thursday.

While forcing the Nets into 16 turnovers, the Celtics remarkably only committed four on their end and shot 37.8 percent from the floor. They somewhat struggled to find consistency within their offense but made plays down the stretch to reel in another win.