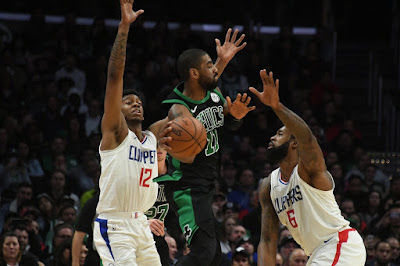 Have you ever heard the saying; 'five times a charm?' Neither have I, but such was the case for the Celtics when they beat the Clippers at the Staples Center 113-102 to snap a four-game losing streak on Wednesday night.

On a second night of a back-to-back in Los Angeles and after a tough loss to the Lakers, Kyrie Irving led the way for the Celtics with 20 points, 8 rebounds and 7 assists. Boston reverted to their hard-nose defense, as they forced the Clippers to turn the ball over 19 times, while holding the home team to 44.3 percent shooting from the field.


"This is a hard league," Celtics coach Brad Stevens said. "You're going to have your ups and downs. We were really fortunate to win 16 games in a row earlier this year. We could have lost about 11 of them. Sometimes things go your way, sometimes they don't."

Jayson Tatum, who has been struggling with his shot as of late, finished with 18 points (7-16 from the field), 6 rebounds and 3 assists, while Marcus Morris and Terry Rozier each added 15 points respectively off the bench for Boston, who are now 35-14 on the season.

Blake Griffin led all scorers with 23 points, despite going 1-of-7 from behind the arc, to go along with his 5 rebounds on the night.


"They do a good job defending, but we got some good shots, some wide-open shots, and just missed," Griffin said afterwards.

Lou Williams also went 1-of-7 from 3-point land, but finished with 20 points, 7 assists, while DeAndre Jordan notched a double-double of 15 points and 14 rebounds for the Clippers, who are now at 23-24 and have dropped three-straight.


"Our guys, for the first time in a while, got a little disbanded by their ball movement and attack," Clippers coach Doc Rivers said. "They have so many athletes, they really like targeting some of our guys with footspeed."

Of Boston's 39 made baskets (on 25 assists), 14 were three-pointers, while also attempting 22 free-throws (hitting 21-of-22), which was the first time in 30 games the Celtics headed to the charity stripe on 20 or more tries.


"It felt like we were getting a lot from a lot of people," Stevens said. "Offensively, this was one of our better games. The way we moved the ball and shared. That was encouraging."

The Celtics are 1-1 on their four-game West coast road trip and will look to begin another win streak when they head to Oakland to take on the Golden State Warriors on Saturday night.

The Celtics were without Marcus Smart, who had a hand laceration and Al Horford on precautionary rest, after he took an elbow to the head on Tuesday night against the Lakers. Though the All-Star big-man showed no signs of suffering a concussion, team officials wanted to be on the safe side since Horford sat-out twice before due to concussions symptoms over the past 12 months.