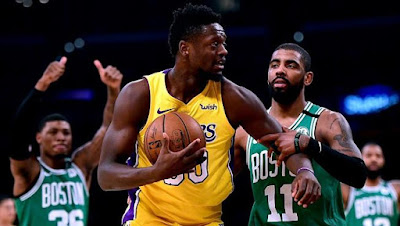 The divisive second half reared its ugly head once again for the Celtics, only this time Boston lost Tuesday night against the Lakers in the final seconds.

With 26 seconds left, Terry Rozier's crucial 3-pointer cut Boston's deficit in half. Marcus Smart and  Lakers guard Jordan Clarkson each drained a pair of free-throws, respectively, but Lakers guard Kentavious Caldwell-Pope missed back-to-back from the charity stripe -- setting up a final attempt to win the game for the Celtics.

Smart pulled down Caldwell-Pope's board with five seconds on the clock and no timeout, raced up the court and fired a contested 3-pointer that bounced off the front the hoop then off the back of the rim as time expired. It was a decent look for Smart, who dribbled the ball behind his back to create space but also had the option of passing the ball to Rozier, who was open in the corner, behind the arc.

Kyrie Irving finished with a game-high 33 points, Smart scored 22 to go with his 8 assists, and Al Horford (12 rebounds, 6 assists) and Marcus Morris each finished with 13 points.

The Celtics offense set the tone early by attacking the paint offensively before creating open looks from the perimeter. Jaylen Brown, Jayson Tatum and Irving attacked the rim early and often before finding guys like Horford (3-of-5) and Smart (4-of-10) behind the arc for open looks.

After outscoring the Celtics by 10 in the third quarter, the Lakers rallied behind Kyle Kuzma's 17 fourth-quarter points -- most points scored in a quarter by any Laker this season -- to pull of an upset at LA. Kuzma finished with a team-high 28 points off the bench, him and Jordan Clarkson (22 points) combined for 50 of the Lakers' 65 points from the second unit.

Boston held the Lakers to 15 first-quarter points but the efficiency of both teams kept the game relatively close before the Celtics grabbed the first double-digit lead of the night. Brandon Ingram couldn't find consistency in his offensive attack, and neither could Kentavious Caldwell-Pope.

Still, the Lakers carried a 12-0 run into the second half -- thanks to their second unit -- which helped pull the Lakers to within two points (53-51) and prompted Brad Stevens to call an early timeout. Smart's 3-pointer ended the Celtics drought before the Lakers turned a 14-point deficit into a two-point lead, outscoring their opponent 31-21 in the third quarter.

Irving's spark came in spurts, specifically when he scored seven straight points for the Celtics to cut Los Angeles' lead from six to two. But a critical turnover by Jayson Tatum with under a minute left, along with a Lakers offensive rebound, gave LA momentum down the stretch as they managed to hold onto their lead, despite missing big free-throws and committing fouls that gave the Celtics opportunities to pull ahead.

The Celtics take on the other team in Los Angeles on Wednesday when they face the Clippers on the second leg of their back-to-back.

Lakers out-rebounded the Celtics, 51-42, including a plus-7 on the offensive boards which led to 23 second-chance points.