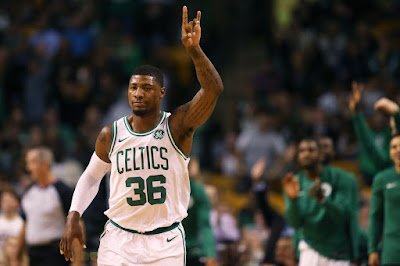 Marcus Smart spent the better part of Wednesday getting criticized about his decision to take a potential game-winning shot attempt at the buzzer of the Celtics 108-107 loss to the Lakers and also at a local Los Angeles hospital getting his hand stitched up after cutting it at the team's hotel.

Just hours before the Celtics tipped-off against the Clippers, the media learned that Smart would miss the game due a mysterious laceration to his hand. Though Brad Stevens doesn't think his guard will be out for a significant amount of time, the team was still investigating how exactly the injury occurred.

“He lacerated his hand on glass in the hotel, got stitches. I don’t know the full story,” Stevens told reporters before the Celtics win over the Clippers. “Mike Zarren (Assistant GM) and Brian Dolan (Assistant Athletic Trainer) were with him in the hospital two hours ago. Got stitches and it doesn’t sound like long-term injury. We’re doing more research on how it happened.”

The Celtics have are off Thursday and will resume practice on Friday at the University of San Francisco, which would be the next time the media will have access to the team before Saturday night's matchup with the Golden State Warriors.

It's doubtful the Celtics will release any more details of Smart's injury, which was to his right shooting hand, before Friday's practice. This is not the first time New England fans have read about one of their team's players suffering a hand injury that required stitches (see a certain Super Bowl bond quarterback).

Though Smart won't deal with the same level of pressure to answer questions as Patriots' star Tom Brady has over the past week in a half, the difference is the Celtics veteran's injury didn't occur during a game or practice.

It appears that Stevens and the Celtics brass are not at all pleased about the situation Smart currently finds himself in. Maybe now he'll learn not to chuck up so many ill advised shots going forward.

Smart finished with 22 points and 8 assists in the Celtics loss to Lakers on Tuesday night, he missed the game's final 3-point attempt at the buzzer.

Brad Stevens said Marcus Smart lacerated his hand on glass at the team hotel today. He’s out vs Clippers and team is trying to determine what exactly happened. pic.twitter.com/8LXRuPlbBj
— Chris Forsberg (@ESPNForsberg) January 25, 2018