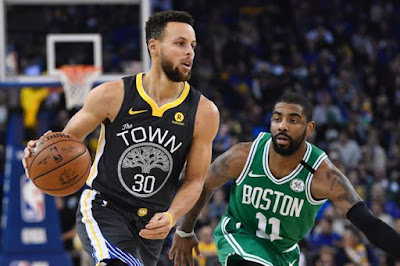 In a playoff-like atmosphere, Saturday night's matchup between the Celtics and Warriors encapsulated one of the best duels the league has to offer -- Steph Curry vs Kyrie Irving.

The two All-Star point guards put on a show, combining for 86 points -- headlined by an epic performance from Curry, who scored a season-high 49 points to lead the Warriors to a narrow victory. Golden State's 109-105 win over the Celtics avenged Nov. 16's loss at TD Garden, and reminded Boston that while the C's can certainly compete with the best, the Warriors remain a cut above the rest.

Irving, who finished with a team-high 37 points, not only gave his team a fighting chance to win the game in the final minute but attempted to send the game into overtime when he intentionally missed his second free-throw with two ticks left on the game clock. Facing a four-point deficit, Terry Rozier drained an off-balanced 27-foot 3-pointer to pull the Celtics to within a point before Boston intentionally fouled Curry.

In an effort to avoid giving the Celtics an opportunity to tie the game, the Warriors intentionally fouled Irving after Curry made both of his free-throws. Irving tried tossing the ball off the rim and into the hands of one of his big men -- Marcus Morris, Aron Baynes -- but hit all net instead of iron, which resulted in a violation and ultimately gave the ball to the Warriors along with the game.

The Celtics got off to the hottest start of the season at Oracle Arena, and leaped out to a 20-12 lead while hitting 7-of-8 from the floor, 2-of-2 from deep and led by Irving and Jaylen Brown. Boston tacked on 37 before heading into the second quarter, Irving and Brown each scored 14.

After the second unit gave up points in a hurry, the Celtics' starters contained the Warriors and held onto a four-point lead at the half (54-50). But the momentum shifted in the second half when Curry's 18-point quarter changed the complexity of the matchup before the Celtics rallied back late in the final frame.

Curry dazzled the crowd, hitting contested 3-pointers, splitting defenders, and driving to the hoop with ease. His 18 points led his team to outscore the Celtics, 30-19.

But Irving's play wasn't too shabby as well, as he put the two-time MVP on skates with his devastating crossover. Irving used his athleticism to savvy ball-handling to get to his spots -- where he drained jump shots in and outside of the arc.

The Celtics chipped away at Golden State's 10-point lead -- the largest lead of the night -- by connecting on a trio of threes from Daniel Theis, Shane Larkin and Irving midway through the fourth quarter. Boston pulled ahead by one point before the Warriors responded with a 7-2 Curry run, which eventually led to a five-point Warriors lead with 42 seconds left.

Brown finished with 20 points, Al Horford, who was solid throughout despite missing a pair of contested layups towards the end of the game, added a double-double (15 points, 13 rebounds) and Morris' 12 points and 8 rebounds led the bench.

Kevin Durant was plagued by foul trouble in the first half, scored 20 points and pulled down 9 rebounds and Draymond Green turned in a double-double (15 points, 11 rebounds).

The Celtics will take on the fourth and final team of their four-game road trip Monday night when they head to the Mile-High City to take on the Nuggets.

Both teams were pretty much neck-and-neck in terms of field goal percentages, the Warriors topped the Celtics by shooting at a 45.2 percent clip, while Boston shot 43.5 percent from the floor. Boston kept the game close thanks to Irving's 37 points but also because of their outside touch. The Celtics finished the night 14-of-28 from behind the arc but gave up a lot of fouls on the defensive side. The Warriors made 23-of-26 from behind the stripe off of 23 fouls, however, the Celtics did attempt 24, they only converted on 17.