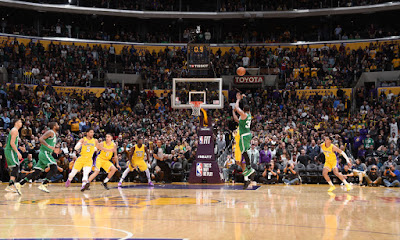 After missing the potential game-winning shot in Tuesday night's 108-107 loss to the Lakers, Celtics guard Marcus Smart knows he didn't make the best play available to him in the final five seconds of the game, but showed little to no remorse about taking the final shot.

Smart explained the level of difficulty of the sequence that led to his attempt -- grabbing a defensive rebound and having to race up the court while creating the best play available isn't always easy, especially when it's unexpected.


"It's tough," said Smart. "I think it was like five seconds on the clock. We think he's [Caldwell-Pope] going to at least make one [free-throw]. We had a play set up, he missed so everybody's scrambling. It is frustrating but we work on those plays, and you've got to be a basketball player and try to make a play."

While Smart didn't make the best play he possibly could have in that moment, his options were very limited. Let's delve into what happened.


After Smart took the ball past half-court, he forced himself into having to take a shot. While Kyrie Irving is the Celtics player you want to see taking last-second shots, he was nowhere to be found.

Irving, who was on the weak side, was deep in the corner and didn't curl towards the top of the key until there was less than two seconds left. Smart's best option was easily Terry Rozier, who had sagged towards the right elbow.

Once Smart past the logo, that's when he could have found Rozier, but his option to Rozier was taken away quickly after he took a dribble behind his back. Shortly after he put the ball on the floor, a pass to Rozay at that point probably wouldn't have been picked off but there wouldn't have been much space for him to get a decent look at the hoop with two seconds left.


"Caldwell-Pope made a good play, he made me change direction," Smart said after the game. "With that short amount of time I wanted to make sure we got a shot off. It felt good when it left my hand. I thought it was going in. That's just how it goes. It's just over with. We gotta turn around and try to get a win tomorrow."

One thing we have learned about the gritty longest-tenured Celtics player is that he relishes in these moments and this misfire won't phase him. Although Smart doesn't have the best track record when it comes to his shot selection, his late-game heroics has become a vital trait to his basketball persona.

Sure, his defensive prowess is typically on display in these clutch moments, however, it's hard to fault a guy for his shortcomings at the end of Tuesday's loss for someone who has come up big for the Celtics in the past.

Brad Stevens was Smart's apologist when he spoke to reporters after the game.


"It's hard to get the rebound to the other end of the court without getting somewhat contested," Stevens explained. "He got it into the operating area and got a pretty clean look at it. We were set up to be able to execute a full-court play at that time. But obviously with the rebound, it makes it tougher because you lose a second or so."

Still don't have a problem with Smart's shot. Especially because -- and I know you Smart skeptics don't want to hear this but -- he was feeling it. Despite missing the biggest shot of the night, Smart finished Tuesday night's game 53.8 percent from the floor, including 4-of-10 from deep.

Also, and this should go without saying, Smart's missed shot wasn't the reason the Celtics dropped one against the Lakers. Boston had no business winning that game, after giving up a handful of offensive rebounds in the final minute and failing to close out on Kyle Kuzma throughout the final frame is what did them in.

Celtics will look to avoid dropping five straight games when they take on Blake Griffin and the Clippers Wednesday night.