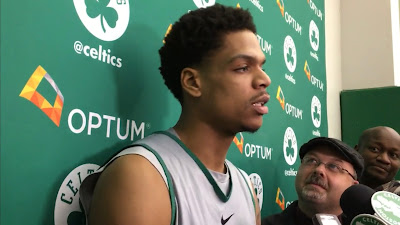 The Celtics officially signed G-Leaguer Jarell Eddie on Saturday to a 10-day contract. The veteran forward took care of all the necessary paper work and made his practice debut with his new teammates at the Waltham facilities.

Eddie has been brought in to add some depth off the bench, as the Celtics battle through injures and illness.


"They're a great team, just try to add my shooting and my floor-spacing abilities," said Eddie to the media when asked what he can bring to the Celtics. "Just give them another part that helps win."

Brad Stevens believes Eddie can help create on offense, something the Celtics have struggled with, especially the last two games that happen to be losses.


"We've always thought very highly of him from afar and look forward to having him around," Stevens added.

Celtics signed G-Leaguer Jarell Eddie to a 10-day deal. What can he add?

Eddie: "They’re a great team, just try to add my shooting and my floor-spacing abilities. Just give them another part that helps win." pic.twitter.com/nMqRvAKiGF
— Chris Forsberg (@ESPNForsberg) January 20, 2018


Eddie, who is averaging 17 points, on 46-percent shooting (51 percent from 3) and nearly 4 rebounds in 10 games for the Windy City Bulls, could see playing time on Sunday afternoon when the Celtics host the Orlando Magic at the TD Garden.

Meanwhile, Aron Baynes was out sick and did not practice on Saturday with the team, while Guerschon Yabusele and Abdel Nader were assigned to Maine Red Claws, both should be recalled before the Celtics upcoming west-coast road trip.


Kyrie Irving (shoulder) practiced today and is expected to return tomorrow after a one-game absence. Aron Baynes is sick and did not practice today.
— Marc D'Amico (@Marc_DAmico) January 20, 2018