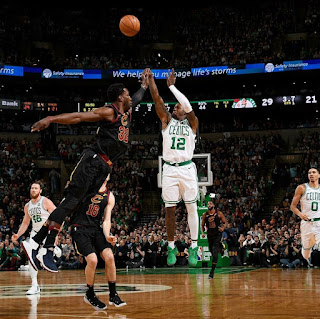 For a game with much anticipation at the TD Garden, where the return of Isaiah Thomas meant emotions would run high, it was Terry Rozier who shined the brightest as he led the Celtics to a 102-88 win over the Cavaliers on Wednesday night.


While their were many storylines heading into a nationally televised matchup between the top-two teams with the best records in the Eastern Conference, it was Rozier, not LeBron James or Kyrie Irving, who finished with a game-high 20 points (4-6 from behind the arc), to go along with 4 rebounds and 3 assists in 20 minutes off the bench.

Rozier scored the last eight points for the Celtics to end the first quarter and put them up 11-points, then followed that up with another eight consecutive points in the middle of the fourth to give Boston, who never trailed in this one, a 21-point advantage over the Cavaliers.

Marcus Smart, Jayson Tatum each finished with 15 points a piece, while Al Horford (9 rebounds) and Kyrie Irving (9 rebounds, 6 assists) both chipped in 11 points respectively for the Celtics, who are now 31-10 at the halfway point of the season.

James had 19 points, 7 rebounds and 6 assists, despite the Cavaliers shooting only 34.8 percent for the night and scoring a season low 88 points. Kyle Korver chipped in 15 points and Jeff Green added 13 points off the bench, while Tristan Thompson notched a double-double with 10 points and 11 rebounds.

It was the first time these two teams played each other since the season opener back on Oct. 17, where All-Star Gordon Hayward fractured his left ankle five minutes into the first quarter.

Isaiah Thomas made his first appearance at the Garden since being traded to Cleveland last August, though he did not play, the Cavs point guard says he has mended fences with Danny Ainge and has nothing but love for the Celtics organization and the city of Boston.

Thomas, who asked the C's not to play a video tribute, saying he would prefer to be honored in a game he's actually playing in, received a standing ovation from the home crowd before the start of the second quarter.

Thomas' former Celtic teammates were seen greeting the 'little-guy' after the game and Rozier also shared on what it meant to have Thomas say he was proud of him.

"When I first came into the league, that's a guy that I watched a lot. The little things he did on and off the court. Like a big brother to me," Rozier said. "Just to hear those words from him, I'm happy that he's on his way back -- so I can guard him in February."

The next time these two meet will be Feb. 11, when Paul Pierce is getting his No. 34 retired. In the meantime, the Celtics will host the Minnesota Timberwolves on Friday night in another ESPN televised broadcast.

Celtics finished with 27 assists on 41 made baskets against the Cavaliers. Old friend Jae Crowder also made his return to the Garden since he was traded along with Isaiah Thomas for Kyrie Irving. The swingman finished with 6 points (2-12 shooting), 9 rebounds and 2 assists in 28 minutes. Crowder got a loud ovation when he was called last during Cleveland's player introductions.