Report: Marcus Smart (hand) is back in Boston, will likely miss rest of road trip 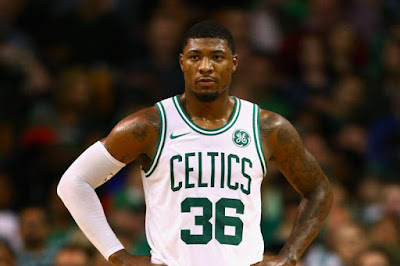 Marcus Smart has returned to Boston and most likely will miss the rest of the Celtics West road trip. Adam Kaufman reported late Thursday night that the guard hopped on a flight from Los Angeles with his right arm in a sling.


According to a source, while the #Celtics remain out west on their road trip, Marcus Smart is back in Boston. He flew home from LA this evening, with his right arm in a sling. Seemingly he’ll miss the rest of the trip.
— Adam Kaufman (@AdamMKaufman) January 26, 2018


Smart suffered a laceration to his right shooting hand on Wednesday afternoon, just hours before the Celtics took on the Clippers. It's still unknown how exactly Smart injured his hand, which received stitches, as Brad Stevens said that glass was the cause of the cut.

Boston has two games left on their road trip against the Warriors on Saturday and the Nuggets on Monday, before the Celtics return to the TD Garden to host the Toronto Raptors for the start of a three-game homestand.

There's no current timetable for Smart's return to the Celtics lineup, but Stevens is hopeful that it's not a long-term injury.