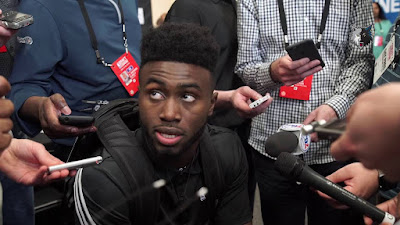 The Boston Celtics are in London, England this week to take on the Philadelphia 76ers and while both teams prepare for their clash across the pond, Jaylen Brown became the subject of a candid interview with British newspaper; The Guardian.

The Celtics second year swingman, sat down with Donald McRae and spoke about president Trump, racism and what role does sports play in the United States.

Brown, 21, who grew up in Marietta, Georgia, a suburb just northwest of Atlanta, has faced racism throughout his journey to the NBA.

"Racism definitely exists across America today," he says. Of course it’s changed a lot –– and my opportunities are far greater than they would have been 50 years ago. So some people think racism has dissipated or no longer exists. But it’s hidden in more strategic places. You have less people coming to your face and telling you certain things. But Trump has made it a lot more acceptable for racists to speak their minds."

During his time at the University of California Berkley, Brown talked about a thesis he wrote on the 'social order' mentality that affect children, especially that come from lower-income situations.

"Even though I’ve ended up in a great place, who is to say where I would’ve been without basketball? It makes me feel for my friends. And my little brothers or cousins have no idea how their social mobility is being shaped. I wish more and more that I can explain it to them. Just because I’m the outlier in my neighborhood who managed to avoid the barriers set up to keep the privileged in privilege, and the poor still poor, why should I forget about the people who didn’t have the same chance as me?"

Brown believes that race and sports go hand-and-hand, as he supports former San Francisco 49ers quarterback Colin Kaepernick's choice to protest during the national anthem, which despite being non-violent, has made many uncomfortable. Brown says that's how you affect social change and Kaepernick was just an example of how sports is used to maintain the social order in the U.S.


"It was peaceful and successful. It made people think. It made people angry. It made people want to talk," said Brown. "Often everybody is comfortable with their role in life and they forget about the people who are uncomfortable. So for Colin to put his career on the line, and sacrifice himself, was amazing. But Colin was fed up with the police brutality and pure racism. He speaks for many people in this country – including me.

"I wasn’t shocked how it turned out. Colin was trying to get back into the NFL and find another team and he’s more than capable. But I knew it was over. I knew they weren’t going to let him back. Nobody wanted the media attention or to take the risk. They probably just wanted to blackball him out of the league.

"That’s the reality because sports is a mechanism of control. If people didn’t have sports they would be a lot more disappointed with their role in society. There would be a lot more anger or stress about the injustice of poverty and hunger. Sports is a way to channel our energy into something positive. Without sports who knows what half of these kids would be doing?"

As for Trump, Brown explains his breaking point when it came to the president, who tweeted at LaVar Ball to be more grateful following the release of his son LiAngelo.


"He demanded a thank you [from Ball after his son, LiAngelo, was released from China after being held on a shoplifting charge]," said Brown. "It’s ridiculous. What happened to people doing things out of the generosity of their heart or because it was the right thing to do? There have been multiple situations where it’s been ridiculous but that one was like: ‘OK I’m done. I’m done listening to anything you have to say.’ A 19-year-old kid makes a mistake overseas and [Trump] demands an apology from his dad?

"For someone like him to be president, and in charge of our troops? It’s scary to be honest. I think Trump’s unfit to lead."

When it came to basketball and the Celtics, Brown says his team is not worried about the future as much as they are concerned about right now


"People say maybe we’ll be good in two years – but I think we’re good now," said Brown. "Right now we’ve got one of the best records in the league [33-10]. I think we could be as good as we want to be. But the more we let people construct our mindset, and start saying two years from now, is the moment we lose."

The Celtics and Sixers set to tip-off from London on Thursday afternoon at 3 PM EST.

To read Jaylen Brown's full interview, click the link below:


Jaylen Brown, aka @FCHWPO of the Boston Celtics, is the most intelligent young athlete I've interviewed in years. He talks here about race in America, Trump, @Kaepernick7, education, the loss of his best friend, the Celtics, London, Arsenal & @ThierryHenry https://t.co/dILTQVzU4S
— Donald McRae (@donaldgmcrae) January 9, 2018