Isaiah Thomas after loss to OKC: Cavs don't 'trust each other,' Celtics 'tried harder' on defense 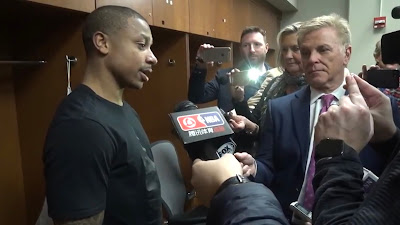 The Cleveland Cavaliers continue to deal with their recent struggles after a 148-124 blowout home loss on national TV to the Oklahoma City Thunder, tying a franchise record for most points allowed in regulation at Quicken Loans Arena.

Former Celtic All-Star Isaiah Thomas did not walk on eggshells when asked about his team's effort in the locker room postgame.


"In Boston we were a much better defensive team," Thomas said, according to Bleacher Report's Greg Swartz. "We tried harder. I don't think we trust each other right now."

The Cavaliers now find themselves at 27-18, the third best record in the Eastern Conferance and six and a half games behind the first place Celtics (34-12). Cleveland is now 3-9 since Christmas Day and 1-5 in their last six outings.


"I've never in my basketball life gave up 148 points, not even probably playing video games," LeBron James said, per Cleveland.com. "They got everything that they wanted. Inside, outside, they had it moving. Big (Steve) Adams is a monster. Russ controlled their whole tempo. Paul George started off hitting threes. Melo... They were all solid. We scored 124 and still lost by 20. A lot to break down."

The Cavaliers heard boos from their home crowd while trailing 43-23 after the first quarter, as Oklahoma continued to pour it on the rest of way.

The Thunder's Paul George (36), Carmelo Anthony (29) and Russell Westbrook (23) combined for 88 of the team's 148 total points, while the current NBA's reigning MVP also added 20 assists in the win over the Cavs.

The Cavaliers, who have lost 10 of their last 14 games, will look to bounce back when they head to San Antonio on Tuesday to take on the Spurs.