Jayson Tatum will play against Pelicans, talks about becoming a father 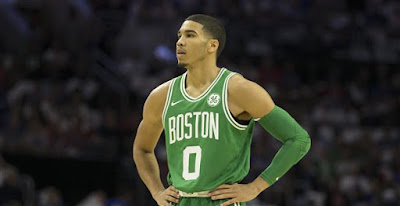 After suffering a left knee injury against the 76ers in London, Jayson Tatum will play Tuesday night against the Pelicans.

Tatum, who sat out of practice over the weekend, rejoined the Celtics for Monday practice in preparation for Tuesday night. After X-rays on Tatum's left knee came back negative, Brad Stevens says he was cleared to practice and will probably play against New Orleans at TD Garden.


"It feels a lot better," Tatum said. "I just tweaked it in the game in London and the long plane ride it got a little stiff. We had a few days off practice -- I mean off until our next game. So they just told me to rest the other day at practice."

The rookie has had an eventful month. From being honored as the Eastern Conference Rookie of the Month, playing in England and becoming a father -- it's been a busy 2018, thus far. Tatum shared a photo of his first-born, Jayson Christopher Tatum Jr., over the weekend on Instagram.


Jayson Christopher Tatum Jr! God’s greatest gift to me! Daddy loves you more than anything in the world man! Truly a blessing🙏🏽❤️!
A post shared by Jayson Tatum🙏🏀 (@jaytatum0) on Jan 12, 2018 at 9:02pm PST


Tatum spoke to the media about what it's like to be a father, and credited his mother for the support she's given throughout the process.

"I've got my mom here so she helps," Tatum added. "She really deserves all the credit. She helps out a lot. So I'm glad she's here."