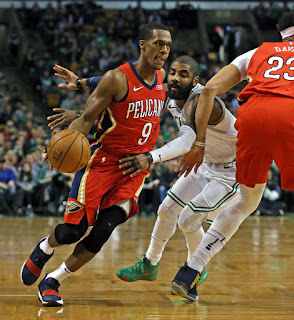 You can add Rajon Rondo to the list of people who don't think Isaiah Thomas should get a tribute video on Paul Pierce night.

In fact, Rondo doesn't agree with Thomas getting recognized at all. The Pelicans point guard questioned his former organization when he was asked about his opinion on Thomas receiving a tribute video the same night as Pierce's retirement ceremony.

When Bill Doyle of the Worcester Telegram and Gazette mentioned last season's deep playoff run to the Eastern Conference Finals, Rondo replied, "Oh, that's what we celebrate around here?


"This is the Boston Celtics. This isn't the Phoenix Suns, no disrespect to any other organization but you don't have conference titles [in Boston]. Do we hang going to the conference finals? What do we hand here?" Rondo asked waiting for a response. When a reporter answered Rondo's question; the Celtics only hang championship titles, Rondo shut down the topic when he replied, "OK, cool."

When Doyle tried to get Rondo to elaborate his answer, Rondo got testy with the reporter by stating he was done talking about Pierce and Thomas and eventually replied, "next question, no comment." Click the video below to see Rondo's reaction.

Rondo, who was honored with a tribute video when he made his first visit to Boston as a member of the visiting team in 2015, was the starting point of the 2008 championship team.