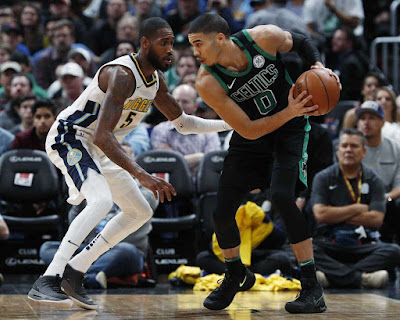 With the four-game west coast swing coming to a close, Boston leaned on its best and youngest players for strong offensive performances and they didn't disappoint.

The offense of Kyrie Irving and Jayson Tatum shined for the Celtics, leading their team to its second win in four tries as they escaped Denver with a 111-110 win over the Nuggets.

Irving and Tatum's back-to-back layups pushed the lead up to five (105-100) in the final minutes of the game. After Trey Lyles responded with an easy layup, Al Horford drained one from deep before Denver's quick 6-0 run tied the game up at 108.

Out of a Brad Stevens timeout, the Celtics' high pick-and-pop play between Irving and Horford ended with Horford flying past Nikola Jokic. He then drove down the key before faking a layup attempt and finding Jaylen Brown with an open corner 3-pointer that put the Celtics up for good with 33 seconds left on the game clock.

Nuggets point guard Jamal Murray made a quick two to cut the lead to one point in an effort to keep the two-for-one opportunity, which left the Celtics with 28 seconds on the game clock. Denver eventually got the ball back but Will Barton's final 3-point attempt didn't come close as the Celtics manage to fend off the home team.

Denver was terrific in controlling the pace initially before the Celtics got it going and leaped ahead in the first half. Irving's offense set the tone, while rookie Jayson Tatum shook off his scoring funk as he scored 10 first-half points while Irving led with 15.

Irving scored a game-high 27 points to go with his six assists, Tatum added 20 points and six rebounds, and Marcus Morris led the bench with 14 points and four rebounds.

The Celtics outscored the Nuggets, 32-21 after the opening frame, but led by the same margin at the half (56-45). Boston built a 20-point lead in the second quarter but Denver responded quickly, and did the same towards the beginning of the second half.

The Nuggets went on a 13-2 run, while forcing a four-minute Celtics drought to grab their first lead since the opening minutes of the game. With Jokic as his main beneficiary, Murray took matters into his own hands playing the role of the facilitator, while also being a secondary scoring option.

Jokic finished with a team-high 24 points, 11 rebounds, Trey Lyles scored 20 from off the bench and Barton added 19 points, 7 rebounds and 7 assists.

Through three quarters, Jokic already had a double-double going (20 points, 11 rebounds) and Murray was flirting with one of his own (10 points, 8 assists). Denver led 82-80, after tacking on 37 third-quarter points.

Boston will head home for a three-game home stand that kicks off Wednesday at TD Garden against the Knicks.

Celtics were feeling it from behind the arc -- they shot 47.2 percent from deep on 17-of-36 attempts. Marcus Morris and Daniel Theis each hit three (6-of-10 combined) from the second unit, while Kyrie Irving, Jayson Tatum, Terry Rozier and Semi Ojeleye each drained a pair.