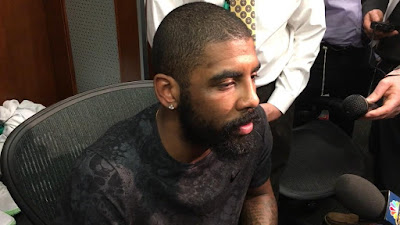 Kyrie Irving spoke to the media ahead of Thursday night's game against the Sixers, updating the status of a nagging injury that has plagued him for the last three weeks, according to him.

Moments after Brad Stevens announced Irving was ruled out for the Celtics, Irving revealed he underwent an MRI after experiencing a great deal of soreness prior to Tuesday's game against the Pelicans. While the aching had been bothering him for weeks, Irving says the pain reached new heights before tip-off, which prompted Irving to get it checked out.


"It was just giving me a little discomfort over the past few weeks and I've just been playing through it," Irving said. "In terms of preparing best for every single game and I just felt it was best to get a few tests and make sure everything's alright."

When asked if there was a specific incident or play that triggered the discomfort, Irving called it gradual soreness.


"Going into my shot and driving left, just not feeling as confident as I'd like to be," Irving explained. "I just thought it would be best just to take a day or two to get it evaluated and meet with our medical staff, meet with my strength and conditioning coach, and strengthen it up and then hopefully go on Sunday."

Fortunately, the results of the MRI showed no structural damage.


"I did it for precautionary reasons and everything was fine," Irving said. "So structurally, everything is good in my shoulder and I'm [going to] do what's best, take a few days to strengthen it up even more and then try to give it a go Sunday."