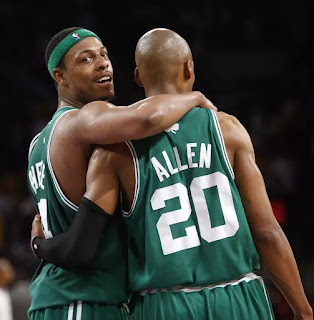 It's a debate that Celtics fans have rehashed for the past six years; should Boston retire Ray Allen's No. 20?

The former Celtic who helped Boston raise its 17th banner in 2008, was a vital piece in the NBA Finals, but his departure in the summer of 2012 left a sour taste in fans' mouth and is the biggest reason why some believe his number should not hang from the rafters at TD Garden.

Allen joined NBC Boston's Kyle Draper on the latest episode of his Celtics Talk podcast -- where he was asked if he'd like to see his No. 20 someday retired alongside the rest of the Celtics greats.


"I'll tell you one thing, and I don't know if anyone knows this but of all the places I have played, I have not had a jersey retired anywhere ever," Allen said. "It is an incredible honor."

Allen went on to say that although it would mean a lot to him, he isn't the one who can ultimately make that decision.


"It would be an incredibly special honor to be in that building, in that rafters," Allen explained. "So I would tremendously appreciate it but that's not for me to decide."

The topic of seeing his number retired came up after Draper asked Allen about Paul Pierce's Feb. 11 jersey retirement ceremony and how felt about it.


"The sad thing about it is he didn't stay in Boston his whole career," Allen said. "Just knowing that the way he played, as long as he played in Boston... obviously we get old, can't make decisions [on how we] end our career but just knowing that he's been this guy that's been forever known as a Celtic in that uniform, and helped bring a championship to Boston, especially where he started as a rookie -- it's a great story for him. It's a great story for the fans. It's like the journey well-respected because he came in as a young person, was able to help them get to the promised land especially after such a drought."