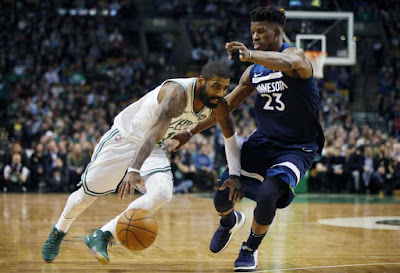 With expectations at an all-time high heading into the regular season, Kyrie Irving felt the pressure of taking on a new challenge when he joined the Celtics and reminded us about the importance of team success over personal success after Friday night's win over the Timberwolves.

The Celtics, 32-10, not only hold the best record in the Eastern Conference but have defeated some of the league's elite teams to get there and have recently put together wins that were anchored by team defense and a well-balanced attack on offense. Irving, who turned in one of his fewest point total of the season (11) in a Celtics win against the Cavaliers on Wednesday, followed that up with a modest 16-point performance that was enough for a 91-84 victory over the Timberwolves.

But Irving finished with nine assists by getting his teammates involved offensively as his play led the Celtics in the fourth quarter. He controlled the tempo, while putting forth the effort on rebounding and defense -- which has helped close out wins in the final frame.

Irving has been a leader for this young talented group, and he reflected on how in his younger years it was easier to focus on one specific game rather than seeing what he focuses on now -- the bigger picture.


"As a young player I used to get stuck in one game and think that this was going to be the end all, be all," Irving explained. "If I don't shoot well tonight then I don't know if I'm going to make it until tomorrow, man. And that's how maniacal I am about the game. But now it's really about the big picture, as long as you can affect the game on the defensive end, offensive end, and put your team in a great position to win, that's the only thing that really matters. All the other stats and everything, you can try to make important, you can, but it'll deviate you. I've been there. For me, when you have this group you can't ever lose it, can't ever come put myself first, can't ever do things that would be detrimental to our team's success. That's why I hold it."

He also spoke on how one's patience is tested throughout an 82-game season -- something he's learned this season in his newfound role in Boston.


"When I actually kind of had a chance to slow down and realize that patience was going to get me through these long NBA seasons," Irving said. "I can't necessarily pinpoint a specific point, but for me this season has been a learning experience to be able to do that. The expectations that were brought forth on this season, that were brought forth on myself, expectations that I had, if I didn't have that patience, then I probably would have lost it. And I can't lose it. And I refuse to, I'm just too strong internally and mentally to do that. And then the talent on the court will do itself, as long as I put the work in every single day."

With wins against the Warriors, Spurs, Rockets, Cavs, and Timberwolves, the Celtics have defeated top-tier talent throughout the span of a grueling schedule and it looks like the patience has paid off. No other team has played 43 games up to this point, still, Irving and the young Celtics have learned ways to squeeze out wins and have done it in dramatic fashion.

Irving is averaging 24.2 points, 5 assists and shooting 48.4 percent from the floor this season. The Celtics are riding high on a five-game winning streak and will look to make it six Saturday night against the Nets.