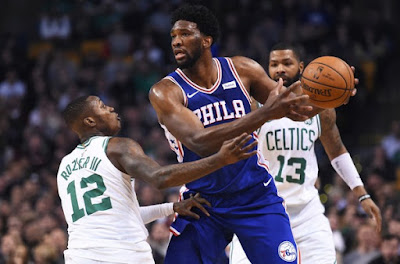 After blowing a 22-point lead in a devastating loss one week prior, the Sixers didn't need much to psych them up for Thursday's rematch at TD Garden.

Whether Kyrie Irving was playing or not, the Sixers entered TD Garden with revenge in their eyes and it showed as they held off the Celtics in an 89-80 win. Although the absence of Irving certainly helped, the Sixers came out strong defensively -- setting the the tone in the first half, which ultimately sparked their offense and led to a 21-point lead with 9:16 left in the game.

But like we've seen all season long, the Celtics didn't go down without a fight. Boston reminded the Sixers why they're one of the best defensive teams around by forcing 10 fourth-quarter turnovers and squeezed out a run in the end that turned an enormous deficit into a three-possession game.

After Jayson Tatum's corner-3 pulled the game to within seven -- bringing his team to single-digit territory for the first time since the first half -- the Celtics failed to capitalize. They had three attempts from behind the arc (2 from Horford, 1 from Brown), including two in the same sequence but came up short in the final minutes.

Philly regained control and held on. Joel Embiid's 26 points and 16 rebounds led the way for the Sixers, Dario Saric chipped in 16 points and T.J. McConnell added 15 points from off the bench.

The first half featured one of the ugliest offensive quarters of the season for the Celtics, Philly capitalized on nine second-quarter Celtics turnovers in the midst of a 15-2 Sixers run. Boston attempted to shoot their way back into the game but failed miserably -- 1-of-7 from deep -- and only managed to score 13 points in the frame.

The bleeding didn't stop there, Philadelphia kicked off the second half with another run -- this time it was 24-7 -- which gave the Sixers a 56-39 lead w/4:35 left in the third quarter. The Celtics couldn't find their offensive rhythm, while the Sixers picked apart their defense with little to no resistance.

But the Celtics managed to chip away in the fourth quarter, led by a well-balanced attack from Al Horford and Jayson Tatum, while guys like Shane Larkin, who forced a crucial offensive foul on Saric, and Marcus Morris made key plays down the stretch.

Horford and Morris both led the Celtics with 14 points each, and Brown finished with 12 but they all came up short from truly threatening the 76ers in the final minute of the game.

The Celtics will have a couple of days to regroup before hosting the Magic on Sunday.

The Celtics and Sixers combined for 41 turnovers. After Boston committed 15 in the first half, they turned around and forced 11 Sixers turnovers, which catapulted their offense, specifically in the fourth quarter.