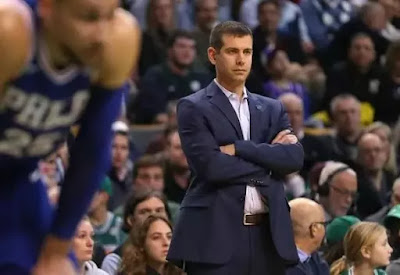 It only took 15 seconds into the second quarter for Brad Stevens to signal for a timeout. He had seen enough and expressed his frustration with his team's offense the best he could -- by ripping his players apart.

It was as if he could foresee what was about to unfold before him -- one of the coldest shooting quarters of the season.

In a quarter where they surrendered nine turnovers, went 1-of-7 from deep and tacked on a measly 13 second-quarter points before halftime, the Celtics looked like a team that needed a kick in the butt to wake them up. Although Stevens could sense where things were heading before the dreadful second quarter unraveled, he also knew his verbal outburst would eventually get through to his guys.


"It at least took 15 seconds and probably more like 44 minutes is how long it took to resonate," Stevens said after Thursday night's 88-80 loss against the Sixers. "We just didn't play hard enough on offense and again, we played really hard on defense and it's a testament to them [the Sixers] that we knew coming in that you have to play with great intensity on offense to get what you want because they deny you, they switch, they're long, they're athletic. Without [J.J. Redick] they're going to play longer guys, so you knew there was going to be more switching. And we -- very rarely do people talk about, like, the motor and the offensive, how hard you have to play on that end and we just didn't do it."

It took a while for the Celtics to finally carve deep into their big deficit. Shrinking the lead from a double-digit advantage was the hardest part as Boston showed positive signs in brief spurts, only to succumb to a 21-point hole in the final frame.

However, when Stevens' guys managed to score seven straight points, TD Garden's faithful came alive as they rallied behind Jaylen Brown, who completed a three-point play with 3:30 left, to pull within 12 (84-72). But when the officials wiped away another three-point play from Al Horford -- one that could have cut Philly's lead to nine with the clock stopped -- it was one of many devastating blows to the Celtics' chances of tying the game.

We've seen this story time and time again with these Celtics, a team that's quickly become too comfortable with huge leads because of how many come-from-behind wins they've stacked thus far. Is Stevens worried that players feel like they can come back from a deficit any given night since they've done it so many times this year?


"Yeah, and that's a good question," Stevens responded. "If we do, we won't be very good so that'll take care of itself. That'll humble us enough and we'll keep losing. I mean, that's what happens when you do that. So, other teams get better as the year goes on and they get better at holding those leads, and get better at playing in that situation and I never thought we had much of a shot [to comeback against Philly], even when we were making that run at the end. I just thought they dominated the game. You know, sometimes the game goes the way it deserves to go."

Let it be a lesson to the Celtics, per Stevens, who was discouraged by his team's performance but still pointed to the fourth-quarter stretch -- where his team threatened their opponent's lead -- as a good example of what can happen when his team is moving the ball well offensively while creating stops on the opposite end.

Thursday night's 80 points marked a new season-low for the Celtics, as the Sixers snapped a seven-game home winning streak Boston had against Philadelphia.