Kyrie Irving expected to play Sunday against the Magic 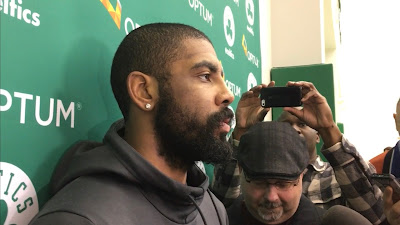 Kyrie Irving went through the entire Celtics' off-day practice on Saturday and is expected to play Sunday when the team host the Orlando Magic after missing one game to rest his sore shoulder.

Irving, who was announced as a starter in next month's NBA All-Star game, sat out in the Celtics loss to the Philadelphia 76ers after undergoing tests on his shoulder that had been bothering him as of late. An MRI revealed no structural damage, but Irving will continue to receive treatment when he makes his return.


"I'm still going to need some work, but I'm just ready to go back out there and play," Irving said to the media after practice. "I'm just glad I had a few days to kind of reset and do the things needed in order to put myself in a great position to go out there and play."

Without Irving, the Celtics were held to only 80 points (season-low) against the Sixers on Thursday night. Brad Stevens has emphasized a need to generate more offense, even prior his starting point guard being unable play.

Irving was asked about the Celtics recent offense woes, and he maintains that his team is still a work in progress when it comes to consistently scoring points.


"We still have a little ways to go in order to figure things out as a team, in terms of opportunities we can take advantage of and just playing the game within the game," Irving said. "... There's just so many little plays that don't go in the stat sheet and small plays that make a big difference. Just the sacrificial cuts and the pace of cuts and screening and just details that go into really, really making a difference of getting your teammate open or your teammate a shot in a very, very small window that us professionals have to kind of make a decision and it has to happen like 'that,' in the snap of a finger.

"Sometimes it's not being made. And when it's not, the defense is so good in this league that that window can close and you try to create an opportunity to nowhere. We'll get better."

Though the Celtics are 2-1 when their All-Star point guard is not in the lineup, there is a significant drop-off in offensive rating when Irving is on the floor (108.1) versus when he is off it 97.5).

Irving is averaging 24.1 points, 5 assists and 3.6 rebounds through 43 games this season. He finished as the top vote-getter among guards in the Eastern Conference.