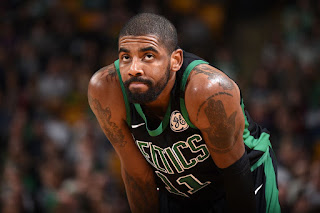 After dropping three straight home games, first three-game losing streak of the season, a big slice of humble pie may be exactly what the Celtics need, according to Kyrie Irving.

Clinging onto the best record in the Eastern Conference (with the Raptors breathing down their necks), the Celtics are in jeopardy of dropping four straight as they hit the road for a four-game road trip. Irving, however, sees a brighter side to the Celtics' struggles -- which to him is an opportunity for his team to learn from its mistakes, improve and ultimately become a better team than they were before.


"We gotta hit some adversity," Irving smiled before explaining what he meant. "We have to hit something, we need it as a team. There's a lot more adversity down the road and we've go the be able to weather the storm no matter what."

After leaping out to a quick start, which ultimately led to one of the best records in the league and including a 16-game winning streak, the Celtics have dropped three straight and in the process found themselves in sizable deficits. Last Thursday it was 21 points, and Sunday -- by the lowly Magic, owners of the second-worst record in the Eastern Conference -- it was a 19-point hole in the fourth quarter.

What we could be seeing is the result of a relatively young team that is still getting familiar with each other. While it still may be too early to hit the panic button on the season, the past three outings could be the signs of a team simply still figuring each other out.


"Whether you're doing things at an optimum level as you would like, that's part of the game of learning one another," Irving explained. "Being able to figure out how to respond from that. Us as a group, we've come together in the last four months, five months, it's new. We need to hit something like this in order for us to grow. It's part of the game; part of being on a team, part of being a professional. Any team, any environment, you have to have stuff like this where you have to figure it out."

The annual west coast road trip could be just what this team needs to come together. Al Horford, who was asked about the key for this team to bounce back from its three-game skid, believes getting down the basics of figuring out game film and breaking it down will make the difference.


"I think it's having a good practice tomorrow, looking at film, seeing what we need to do and once we get into the games, we have to understand teams are coming for us," Al Horford said. "I've felt like we handled it okay throughout the season, but it's even more evident now. So we have to do a good job of making sure that we're bringing the fire and they're not bringing it to us."