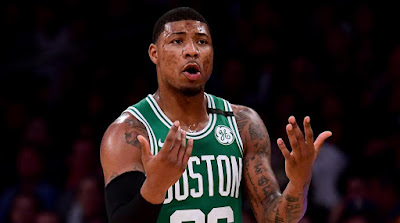 Marcus Smart will miss approximately two weeks after lacerating his right hand at the Celtics hotel, hours prior to their Wednesday's 113-102 win over the Clippers, the team announced Friday.

According to Smart's tweets, he injured his shooting hand after swiping at a picture frame on the wall. The rest of the Celtics were at practice, as they prepare to take on the Warriors, while Smart was back in Boston apologizing to the organization and fans via social media.

I want to take this time to express my sincerest apologies to my teammates, coaches, and most of all the amazing Boston Celtics fans. I'm embarrassed and disappointed in my actions. I swiped at and hit a picture frame on the wall. I feel like I let all y'all down
— marcus smart (@smart_MS3) January 26, 2018

I promise I will learn from this situation and come back better than ever. I love y'all and I truly appreciate all the support
— marcus smart (@smart_MS3) January 26, 2018

Upon returning to Boston on Thursday, Smart was evaluated by doctors Anthony Schena and Andrew Terrono at New England Baptist Hospital.

Brad Stevens said the Celtics will look into further discipline for Smart, but that the team's focus was getting the rest of his players ready for Saturday's game against Golden State.


"Disappointed, as you can imagine," Stevens said of Smart's actions. "That's probably the right word for it. It is what it is. Our other guys will be looking forward to the challenge tomorrow."

When asked if he believed Smart's past behavior with his temper was a concern, including punching a hole in a wall last season in Washington after being sent to the locker room early, Stevens replied that Smart needs to control his emotions


"Obviously, he's a very passionate person and didn't handle his emotions correctly [this week]," Stevens said. "That's something that we'll talk about more with him and go from there."

Celtics All-Star Al Horford, who also missed Wednesday night's win over the Clippers as a precaution of a possible concussion after taking a shot to the head in Tuesday's loss against the Lakers, returned to practice on Friday without any signs of concussion-like symptoms.


"Everything cleared up, and I didn't have a concussion," said Horford, who has suffered two concussions over the past twelve months. "The team was trying to protect me, just due to the history of everything, but I'm just happy I'm able to go through practice, workouts, and be fine. ... This extra day has helped me get prepared for [Saturday]."

Horford said the team is behind Smart regardless of his actions and despite the Celtics being shorthanded for the rest of their road trip.


"It's unfortunate to see that. Marcus is a teammate that I have a lot of respect for, and I'm going to stand by him," Horford said. "Whatever the decision was, he made a bad decision. As a group, we're going to support him, and I hope that he gets well. We expect him to be back."

Kyrie Irving added: "For us it's next man up. It's unfortunate what happened, and I think it's up to Coach, what's best for our team after this. So I'll leave that all to Coach."