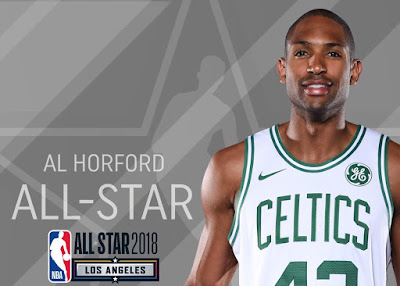 Kyrie Irving won't not be the only Celtic representative in next month's NBA All-Star game, as Al Horford will also accompany his teammate to Los Angeles.

Horford was selected as an All-Star reserve for the fifth time and his first as a member of the Celtics. Horford is a huge reason Boston is at the top of the East at 34-13, while averaging 13.3 points (43 percent from 3-point range) per contest, he also leads the team in rebounds (8), assists (5.3) and blocks (43) in 43 games played.


“He’s a big part of our team in order for us to be number one in the East and hopefully sustain that spot,” Kyrie Irving said on Tuesday. “We know how valuable he is. The Celtics organization, our team, everybody. He definitely has a case; he’s got my vote.”

Thanks to my Family, teammates, Coaches, and all the fans for the support. Go Celtics!
— Al Horford (@Al_Horford) January 24, 2018


Instead of the traditional East versus West format, it was decided this season to have two captains 'draft' their teams instead. LeBron James and Steph Curry, who were the top vote getters in each conferance, will choose their respective teams.

Rosters will be chosen regardless if a player's team is in the East or West. Teams will be announced come Thursday after both captains choose their squad via a conference call earlier that day.

The NBA All-Star game will be played on Sunday Feb. 18 on TNT.