Isaiah Thomas has forgiven Danny Ainge, nothing but 'love' for Boston 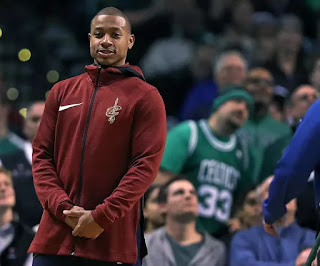 When Cavaliers guard Isaiah Thomas walked into TD Garden to take on the Celtics Wednesday night, the nostalgia was so strong that he nearly walked into the Celtics locker room.

Thomas, who had strong words for Danny Ainge last summer after being dealt to Cleveland, not only vowed to never speak to the Celtics president of basketball operations but expressed his displeasure with how the organization mishandled the information regarding his hip injury. However, all of that was forgotten when Thomas returned, and he cleared the air hours before the Cavaliers and Celtics took the floor.


"I love this city, I love this organization," Thomas said. "They've given me an opportunity to be who I always wanted to be, and I can't thank them enough, so there's no hard feelings to anybody in this city or in this organization. I'm glad I'm back. There's genuine love."

When Ainge was brought up by reporters, Thomas said the two have made up and got a chance to chat face-to-face after seeing each other in the hallways.


"Have I forgiven Danny?" Thomas asked. "He texted me last night. So yeah, we're good."

Thomas also said he watches a lot of Celtics basketball and joked about Marcus Smart flopping too much and how impressed he is with Terry Rozier's development. Although he's accepted how everything went down between him and the Celtics, Thomas reminded everyone how hurt he was after finding out he would no longer be playing for Boston and how excited he is about his future.


"It hurts no matter what team you get traded from," Thomas said. "But I knew once I got traded to Cleveland it was like it's an even bigger opportunity for me, a bigger platform playing with arguably the best player in the world. Realistically, being able to compete for an NBA championship is something I've always wanted to do. So when that opportunity came I just had to take it and run with it. And I'm glad I'm back and able to put my talents and help this team in any way possible."