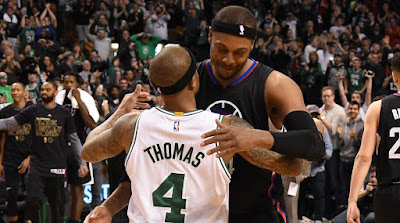 Thomas, who was inactive against the Celtics Wednesday after making his Cavs debut the night before, requested for his video tribute -- that the Celtics had planned for Wednesday -- to be postponed to a game when Thomas will be able to play in. Thomas explained that he would rather play in the game he will be honored and have his family in attendance.

The Cavaliers don't return to Boston until February 11 -- the same day the Celtics plan on having their Paul Pierce Retirement Ceremony -- an event that was announced last summer before the start of the regular season. Pierce didn't seem crazy about the idea of Thomas being honored on the same night of his ceremony.


"I'm not saying Isaiah shouldn't get a tribute video," Paul Pierce said on The Jump, "But on February 11, the night I get my jersey retired, I'm not sure I want to look up at the jumbotron and see Isaiah highlights after all the years I've been there."

The future Hall-of-Fame'r went on to say that Thomas already had his night -- pointing to his return to TD Garden Wednesday -- and that Thomas should have to wait passed February 11.

Pierce went on to mention Kobe Bryant's retirement ceremony, which he was in attendance for earlier this season, and says he hopes he sees the same kind of presentation from the Celtics. Throughout the game Lakers-Warriors game, the Staples Center showed various highlights of Bryant on the jumbotron during timeouts.


"I enjoyed watching that throughout the game," Pierce explained. "Hopefully, the Boston Celtics will do that for me. I'm not sure if I want to see an Isaiah video that night."