Report: Kyrie Irving used surgery to threaten the Cavaliers if they didn't trade him 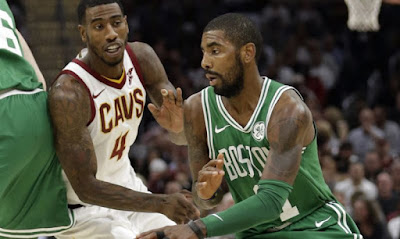 Joe Vardon of Cleveland.com reported on Thursday that Kyrie Irving threatened the Cavaliers that he'd sit out the season and have knee surgery if his trade request was not granted. Obviously the Cavalierss felt compelled to complete a deal, as the Celtics agreed to swap point guards in late August, a month later after Irving's initial demand.

The report states that the relationship between Irving and the Cavaliers' front office was beyond repair after a meeting in July took place between both parties.


“According to multiple sources, Irving threatened to sit out the season and have surgery on his knee, convincing Gilbert and Cleveland’s front office that the relationship with Irving was not salvageable.”

Varon also writes that Irving will require a minor procedure as a follow up to the surgery that repaired a broken knee cap and sidelined him during the 2015 NBA Finals against the Warriors.


“It’s not pressing -- Irving is averaging 24.5 points and shooting a career-high .477 from the field -- but the procedure would ease some of the swelling and day-to-day pain he feels.

Such a procedure is typically done in the offseason; but he threatened to not come to training camp (first reported by ESPN) and then have the procedure during the season, leaving the Cavaliers without a point guard.”

It's no secret that Irving complained of soreness in his surgically repaired knee at various times last season.

Irving reportedly was favoring his knee during the Celtics Tuesday night loss to the Lakers, but it's not clear if it had to due with the surgery back in 2015 or if something occured during the game.


Irving was asked about the knee after appearing to favor it during Lakers game. "A little sore tonight," he said, "but it's part of being a professional, being able to weather that to give my team a chance to win."
— Jay King (@ByJayKing) January 25, 2018


There was no signs of soreness for Irving after the Celtics win over the Clippers on a second night of a back-to-back, as he led the way with 20 points, 8 rebounds and 7 assists.

Despite the Cavaliers being 6.5 games behind the Celtics and dropping 11 of their last 15 games, they do not have any regrets, since Irving did not want to be in Cleveland anymore.

It's also noteworthy to mention that the Cavs are also actively seeking trade options to improve their roster.