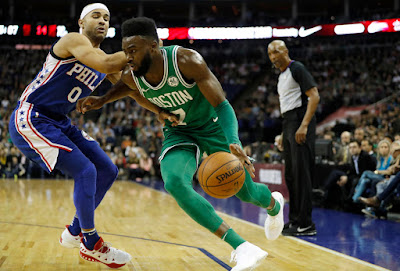 The Celtics had to fly across the Atlantic Ocean to finally get some time off after their first 43 games in 81 days of the 2017-18 regular season. After some much needed rest and being down 22-points, the C's, led by Jaylen Brown, beat the Philadelphia 76ers 114-103 at the O2 Arena in London.

Brown led five Celtics players scoring in double-figures with 21 points and 4 rebounds, while Kyrie Irving added 20 points, 7 assists and 6 rebounds, as Boston won their seventh straight. After coming back from a 22-point Sixers lead, the Celtics held on in the fourth quarter as Brad Stevens emptied out his bench in the game's final minutes.

The Celtics have made it a habit of coming back from big deficits this season, and added another great comeback against Philadelphia in England. The 76ers (19-20) jumped out to a 49-27 lead halfway through the second quarter behind JJ Reddick's (5-9 from behind the arc) hot shooting. The veteran guard led the Sixers with 22 points and 7 rebounds, while Joel Embiid had 16 points and Ben Simmons added 15 points.

Boston would cut the deficit in half (57-48) by intermission after holding Philadelphia scoreless for the last 4:37 of the quarter. Jayson Tatum hit his first five shots to open up the third period and midway through the third Boston pulled ahead for first time and never looked back in route to a 37-22 Celtics third-quarter.


"This team that we just played today is the best defensive team in the NBA and we felt all of that," 76ers coach Brett Brown said. "When you look at their individual defensive players to a man, they're as strong positionally as any team in the NBA."

The Celtics extended their lead into the final frame, capping off a 41-point swing and a 104-85 advantage (their largest of the night) with 6:59 left.

Marcus Morris chipped in 19 points on 7-13 shooting and 8 rebounds off the bench. Jayson Tatum chipped in 16 points and Al Horford finished with 13 points, 8 rebounds and 7 assists for the Celtics, who are now 34-10 on the season to lead the Eastern Conference standings.


"It's always great to believe in fate," Irving said when asked to compare this current Celtics team to the 2008 championship squad. "But for us we have to be dogged in every moment we're afforded. It's great for that to happen for that past team but it's the past. We have to be very present. Winning an NBA championship is one of the hardest things you can do in life."

The Celtics, who played their eighth regular season match in London, snapped the Sixers four-game win streak, giving Brad Stevens his 200th win as an NBA coach, to become the seventh in franchise history to reach that feat.

Stevens spoke on the confidence of his players despite being down 22-points early on.


"There was no real panic," Stevens said of Thursday night comeback win against the Sixers. "But we had to play a lot better than we were. I thought our guys looked really good in that third quarter, early part of the fourth."

Boston will have a few days to fly back across the pond before they host the New Orleans Pelicans on Tuesday at the TD Garden. Tip-off is at 7:30 PM.

The Celtics assisted 24 times on 43 made baskets, while out-rebounding the Sixers 46-37. The neutral O2 Arena crowd chanted 'MVP!' each time Kyrie Irving made it to the free-throw line.