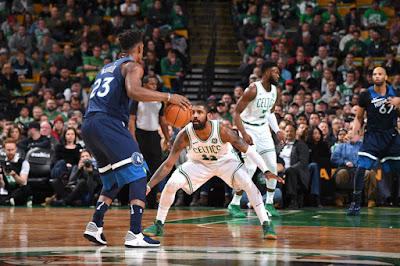 The Celtics' depth is real.

It's been their backbone along with their team defense in wins against some of the league's elite teams, and Friday night was no different.

Coming off of their win against LeBron James and the Cavaliers, the Celtics countered one of the league's premier big men in Karl-Anthony Towns with a well-balanced attack and high-caliber defense and cruised to a 91-84 win over the Timberwolves.

Minnesota's 84 points is a new season-low for a team that entered Friday night's game with the seventh highest scoring averaging (108.4) in the league.

Towns' monster double-double (25 points, 23 rebounds) certainly made him the star of the night but with Jimmy Butler (14 points) and Andrew Wiggins (10 points) each shooting 25 percent, combining for 6-of-24 attempts, it made life tougher for the team with the fourth-best record in the Western Conference.

It was a chilly start for both teams, inside and outside TD Garden and after 12 minutes of play, the Celtics and Timberwolves were knotted up at 19. Towns found his groove throughout the first half and had a double-double (14 points, 13 rebounds) by halftime.

Through three quarters, the Celtics wiped out a seven-point deficit and took a 66-62 lead into the final frame. With 14 points, Marcus Smart led his team in scoring and was an efficient 7-of-11 from the floor.

He finished with a team-high 18 points, leading five Celtics in double figures. Kyrie Irving flirted with a triple-double (16 points, 9 rebounds, 8 assists), Terry Rozier (9 rebounds) chipped in 14 off the bench, while Aron Baynes and Jaylen Brown each finished with 11.

Rozier utilized pockets within Minnesota's defense as he weaved through defenders and found open jump shots, something that carried over from the first half as he made his presence felt on offense -- scoring 9 points and grabbing 7 rebounds in 14 minutes through three quarters. Irving, who was meticulous in picking his moments when to pass and score the basketball, facilitated the offense by finding his guys down low for high-percentage shots.

Rozier's 3-pointer off an offensive rebound by Daniel Theis, topped off a 7-1 run -- which gave the Celtics a nine-point lead -- before Towns drilled a corner 3-pointer that kept his team hanging around. Boston eventually extended that lead to 10 -- their biggest lead of the night at the time -- by creating second-chance points that was fueled by offensive rebounding.

It was a big momentum killer for the Timberwolves, however, their defense stuck with it down the stretch. Minnesota's defense forced the Celtics into a handful of turnovers but couldn't converted them into points as the game clock trickled down while the Celtics pushed their lead up to a dozen with less than a minute left to play. Boston's defense not only rattled the Timberwolves' shooters but also suffocated the passing lanes as Minnesota struggled in finding an uncontested shot throughout the second half.

Smart and Rozier led the second unit in its scoring production, no question, but Boston's depth doesn't stop there. In the front court, Daniel Theis was a force in the paint -- where he pulled down 10 rebounds to go with his 8 points.

At 32-10, the Celtics will look for win no. 33 at Brooklyn on Saturday before making their trip to London, England on Monday in preparation for their matchup against the 76ers next Thursday afternoon.

Aron Baynes (10), Daniel Theis (10) and Terry Rozier to 56 rebounds, including 17 offensive rebounds that the Celtics converted into 19 second-chance points. The Celtics finished plus-13 in cleaning the glass against the Timberwolves, impressive considering Karl-Anthony Towns grabbed more than half of Minnesota's total rebounds.