Celtics made the right decision, February 11 belongs to Paul Pierce 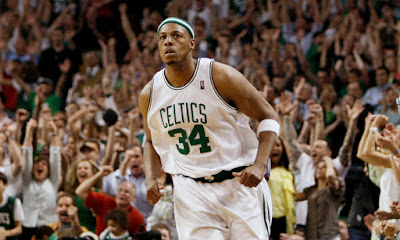 After much debate between fans, the Celtics granted Paul Pierce's wishes -- to be the sole honoree on February 11 -- when the organization that Pierce played 15 season for will lift his No. 34 into the rafters, forever cementing his legacy as one of the greatest players of its franchise.

He's not sharing that night with anyone else, and that's the way it should be. Boston's second all-time leading scorer has earned the right to have his own night -- a ceremony that is expected to be the biggest jersey retirement ceremony the Celtics have hosted since honoring three-time champion Larry Bird.

Earlier this month, Cavaliers guard Isaiah Thomas requested for his video tribute to be postponed after not being cleared by Cleveland to suit up for its game at Boston due to his nagging hip injury.  Thomas said he wanted to play in the game where he was being honored, and also took to Twitter to explain that he also wanted his family to be in attendance.

Well, the next time the Cavaliers will be in Boston is on the aforementioned date of Pierce's ceremony, thus, sparking a debate whether the Celtics should hold both tributes on the same night.

The decision to postpone Thomas' tribute from February 11 ultimately came down to Pierce, according to him, after he spoke with Celtics president of basketball operations Danny Ainge for almost an hour.


"Danny and I talked about it for 40 minutes," Pierce explained to ESPN Tuesday afternoon. "He told me, 'This is what we have planned,' and at the end of the conversation, he said, 'If you don't want us to do Isaiah, we won't.' So I told him, 'I really don't.' So that was it.

Thomas tweeted out the following, shortly after the Celtics confirmed Pierce's conversation with Danny Ainge.


I'd like to thank the Celtics for their gracious offer to play a video tribute on Feb 11th celebrating my 3yrs in Boston. But since it appears this has caused some controversy w/ Paul Pierce's night I'd ask the Celtics instead to focus all of their attention on #34's career.
— Isaiah Thomas (@isaiahthomas) January 17, 2018


The conversation between Pierce and Ainge was one that should have happened earlier this month, back on January 3 when Thomas initially requested to have his tribute moved to a later date. For those who view Pierce's remarks as self-righteous or petty, as Jalen Rose put it, may need a refresher on what transpired throughout the first nine years of Pierce's career.

Aside from one deep playoff run in 2002 that ended in the Eastern Conference Finals, the 10-time All-Star played through two rebuilding phases. The first began with the Rick Pitino disaster from 1998-2001, then came the second when Ainge took over in 2003.

After living in playoff-purgatory for two seasons -- filled with first and second round knockouts -- Ainge blew up the roster and the Celtics eventually hit rock bottom. They missed the playoffs in back-to-back seasons and finished the 2006-07 season with the second worst record in the NBA (24-58), including a franchise record 18-game losing streak, all throughout the best years of Pierce's career.

Yet, he stuck around.

While being one of the best scorers in the league, he watched his peers around him succeed in deep playoff runs after deep playoff runs throughout the prime years of his career but unlike others, never requested a trade. And his patience paid off in the summer of 2007.

The numbers alone not only make him a first-ballot Hall-of-Famer, but the time spent in Boston coupled with an epic title run -- where Pierce took down LeBron James and Kobe Bryant, two of the best players in the league at the time -- is enough for Pierce to have a very special night dedicated to him, and only him. His time in Boston didn't end on his own terms, unfortunately, the franchise had to bridge the gap into the Brad Stevens era without Pierce but his hard work and dedication will never be forgotten.

He never wanted to leave but instead, accepted the trade and gracefully moved on. The Celtics owe him one of the greatest jersey retirement ceremonies they've ever held, Thomas can wait.

February 11 will be the final thank you to Pierce from Boston, a night that will be topped off with his iconic No. 34 highlighted above the parquet where it belongs alongside all the other Celtics legends that came before him.