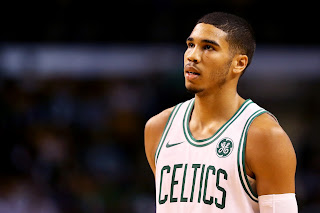 Celtics rookie Jayson Tatum turned in his best month of the season, thus earning the NBA Eastern Conference Rookie of the Month honors for the month of December.

The 19-year-old standout averaged 14.6 points while shooting 52.9 percent from the floor along with six rebounds and one steal per game throughout the month. His 19-point performance against the Rockets stood out the most.

In what was arguably the most impressive win of the season, the Celtics overcame a 26-point deficit with Tatum as a key catalyst down the stretch. He's proven to be someone Boston can certainly rely on for consistent production and has blossomed into one of the league's most efficient 3-point shooters.

He's shooting 46 percent from behind the arc this season -- third-best in the NBA --which is an impressive feat for a player who is already halfway through his rookie campaign.

Tatum is the first Celtic to receive the honor since 2015, when Marcus Smart was recognized for the month of February.