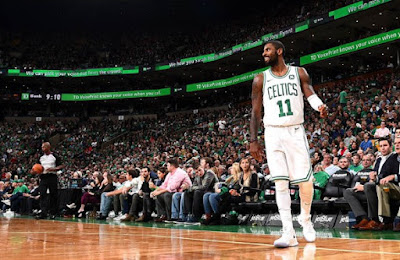 Kyrie Irving will be starting in the 2018 NBA All-Star Game, representing the Eastern Conference All-Stars.

Irving becomes the fourth Celtics player since 2002 to be voted in as a starter in the NBA All-Star Game. This is his fifth career All-Star selection.

Irving is the first Celtics player in five years to be voted in as a starter. Kevin Garnett and Rajon Rondo (was replaced due to injury) were the last two members of the Celtics to get the nod to start, back in 2013.


"I am truly appreciative of the fans of the NBA and the Boston Celtics for voting me in to this year's All-Star Game as a starter," Irving said via the Celtics Twitter account. "I am super proud that I can represent the Celtics in LA and looking forward to putting on a show."

Joining him in the list of starters for the east was his former teammate LeBron James, DeMar DeRozan of the Raptors, Bucks forward Giannis Antetokounmpo and Sixers big man Joel Embiid.

Irving found out he was selected to be a starter moments after Celtics coach Brad Stevens announced his All-Star is dealing with shoulder pain and will not take on the Sixers. Marcus Smart will start in his place Thursday night.

Irving has led the Celtics to the second-best record in the league (34-11), first in the east -- meaning if Boston stays atop of the east, Brad Stevens can not be named head coach of the East All-Stars, due his duties as coach in last season's game. The Raptors sit at the No. 2 seed, they are currently three games behind Boston, while the Cavaliers are a distant third, seven games back of the Celtics.