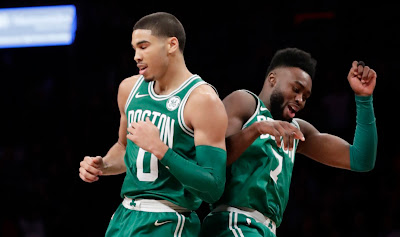 The NBA has officially reached the midway point of the 2017-18 season, despite the Celtics playing game No. 41 on January 3, in a win over the Eastern Conferance favorite Cleveland Cavaliers. Now at 33-10 and a good size lead over LeBron James in the standings, not many had Boston doing this well without Gordon Hayward.

Here's a look at my midseason grades for the first place Celtics below:

Irving has been better than advertised, as he has led the Celtics not only in scoring, especially in games where Brad Stevens' squad found themselves in a deep hole early (OKC, Houston and Golden State, just to name a few) and were able to win. The All-Star point guard has scored over 20 points or more 30 times (scoring 30 points or more 12 times) this season and is even a better defensive player than anyone will give him credit for. Irving is finally proving up to this point, that he can lead a team on his own, as he's the team's most valuable player and a candidate for league MVP as well.

Rozier's confidence is at an all-time high this season and you can tell it's paying off on both ends of the floor. Aside from being one of the Celtics best rebounders (considering his size), Rozier's 3-point shooting has improved from a year ago, as Stevens has shown more trust in the third-year point guard, especially coming out of timeouts. Boston's bench will only continue to benefit from Rozier's energy on offense and defense.

Though Larkin is averaging about 11 minutes per contest in 32 games (out of 43), he's always ready when Brad Stevens calls his name, especially in the fourth quarter when the Celtics need a run. Larkin knows his role and he fits it well, which will lead to more opportunities in the second half of the season. Larkin can be a game-changer at any moment off the bench.

Smart is a frustrating player to gage at times, just when you think you have him figured out, he goes out and draws two charges against arguably the NBA's MVP in James Harden with seconds left in a 26-point comeback win at home. No one is disputing his defensive presence, but over the last several weeks, the young vet has stopped chucking bricks from behind the arc and found his teammates for a better shot, along with taking it to the hole (mostly ending with a trip the free-throw line). Smart might finally have found the balance in his offense game, then again how many times has that been said before? Though he is shooting 39-percent from the floor over the last 10 games, including 44-percent for the month of January, this could be a turning point in a contract year.

The rookie has exceeded all expectations and then some as the No. 3 overall pick in last year's draft. Tatum at one point this season led the league in 3-point shooting at a clip over 50-percent. At 19-years of age, what he's accomplished offensively is unheard of. The rook is very much dialed in as one of the Celtics go-to-scorers (team's best shooter, percentage wise), without putting up many shots in the process. He doesn't turn the ball over (1.3 per game) and if he continues to play with the confidence of a veteran, Tatum will arguably win ROY honors.

After the departure of Avery Bradley, Brown has filled in as the Celtics best perimeter defender, a role that many were weary of him handling. But what no one saw coming was the second-year swingman's improved offensive game and blossoming into the team's second leading scorer after more than doubling his season average from a year ago. Brown's midrange and 3-point shooting has evolved into a threat for opposing team's scouting reports, not to mention his freakish athletic ability to take it to the hoop at any given moment. Don't be surprised if Brown gets Most Improved Player consideration by season's end.

When healthy, Morris is a versatile forward, who can bang with wings and bigs on defense, while hitting 3-pointers and midrange jumpers when needed. Whether he starts or come off the bench, Brad Stevens doesn't have to worry about production from Morris. However, his nagging knee injury has limited him at times this season and we still have yet to enjoy the best of what Morris can fully offer to the Celtics. Look for his scoring and rebound to go up, once his minute restriction is lifted.

A classic definition of a '3-and-D guy,' except in small doses, Ojeleye takes full advantages of his 14 minutes per-game this season when called upon by Brad Stevens, which explains why nearly 80-percent of his shot attempts have been from behind the arc. But what keeps the rookie in the Celtics rotation is his defense, something Stevens is constantly raving about during practice and after games. If Ojeleye can improve on his shooting overall, he'd be much more dangerous off the bench.

The Celtics depth chart at the wing position has made it hard for the former G-League's rookie of the year to get playing time. But when Brad Stevens has inserted Nader, he clearly gets lost on the defensive end, which is a 'No-No' if you want to keep playing more minutes (except if you're shooter, Brad will make an exception, i.e. Kelly Olynyk). Nader still needs to polish many aspects of his game before becoming a valuable option off the bench.

Big Al does all the small stuff that often does not show up in the box scores, as the elder-statesman on the roster. He leads the Celtics in rebounds, assists and blocks this season, while shooting a career-high from behind the arc at 42-percent. It's fair to say that Horford should be heading to Los Angeles next month for the All-Star game, which would make it his fifth appearance. The big man is enjoying a solid year and it's no mistake that Brad Stevens defense starts and ends with Horford.

Baynes makes an impact despite logging in less than 20 minutes on most nights, especially on defense (defensive rating with 94.5). Though he rarely looks for his shot, Baynes can knock down a midrange jump shot with ease, and is always rolling to the basket for easy layup opportunities. The only other Celtic outside of Irving with a championship ring, as his experience is another reason Brad Stevens coaches the NBA's best defensive team up to this point.

Despite limited playing time for the German treasure, Theis has shown he has a high IQ for the game, since becoming a pro in Europe over 10 years ago. The 25-year-old 'rookie' seems to always be at the right place at the right time, while keeping his hands and head up. Theis is a classic big man down low and has even shown glimpse of having 3-point range, when opposing teams dare him to shoot. The future is bright for one of Danny Ainge's hidden gem-signings.

His energy and enthusiasm (can't forget about his dancing and dabbing abilities) alone gives most reasons to believe the rook is simply enjoying the ride so far, but at some point Yabusele has to prove he can be a solid player off the bench, especially during the limited opportunities he's been given. On the plus side tough, 'The Dancing Bear' is arguably the best nickname in the NBA right now.

Five minutes into the season the hopes that the Celtics could be a Finals contender seemed to vanish the moment Gordon Hayward fracture his left ankle, in one of the most gruesome injuries you'll ever witness. Nearly three months and a 16-game win streak later and Brad Stevens not only has managed to keep that hope alive, but he's been able to keep the machine running at the top of the East standings, despite injuries to Hayward, Kyrie Irving, Al Horford, Jaylen Brown, Marcus Morris and Marcus Smart.

Brad Stevens, as usual, has found ways to have his team buy into whatever he's selling and this season is proof more than ever, that Stevens is legitimately a top coach in this league. It remains to be seen if Hayward will return come playoff time, but as currently constructed, the Celtics have enough to challenge the Cavaliers in a seven-game series. If Stevens is not Coach of the Year at this point, I don't know who is.