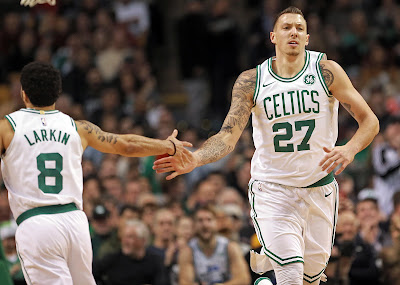 In the summer of 2017, the Celtics went into the off-season in need of bolstering their front court. Amir Johnson was a free agent, as was Jonas Jerebko -- both suffered from an underwhelming 2016-17 season.

Johnson's shaky ankles turned into dust as his role dwindled, while Jerebko broke his face midway through the year and was never the same and Boston tried to fill its holes left behind by Kelly Olynyk and Tyler Zeller to provide stretch shooting and rim protection. Although Olynyk on some nights played exceptionally well, he could never provide adequate production on a night-to-night basis.

Under the surface the lesser known transactions of the watershed off-season was the signing of German center Daniel Theis, 25, an older player who cut his teeth in the European circuit, and played well at EuroBasket that season. Throughout the course of the season he looked like a big man who could hit the triple, find the man cutting to the basket, and defend, despite his smaller and lighter frame.

Enjoying his best stretch in the NBA this season, Theis is averaging 6.1 points, 5.1 rebounds and 1.1 "stocks" (blocks + steals) along with a positive net rating of 5.1 in his last 15 games.

At TD Garden, Theis feeds off the home crowd, where his numbers make you think this once seemingly irrelevant acquisition could help the Celtics in the postseason. He reminds me of Marreese Speights, an irrational confidence guy who is greater utilized at home. Theis also ranks fourth in blocks per game among reserve players who log in at least 13 minutes a night.

He thrives the most against slow-moving centers and on the opposite end he can roll to the basket, has the athleticism to create second-chance opportunities and is excellent at setting screens for ball-handlers. It's still early to say if Theis is a the ideal replacement for aforementioned Celtics front court guys like Johnson and Jerebko but one thing we can agree on is the fact that he adds something different that neither former Celtics players provided.

By comparison per 36 minutes, the numbers between the three players are fairly similar.


If Theis can fully develop a 3-point shot while making attempts at a somewhat of a respectable rate, he can certainly be the ace in the hole for the Celtics at the bottom of Brad Stevens' rotation. When opponents eventually stop leaving him wide open, he'll need to learn to take a hit when barreling to the basket, either for a layup or to kick it out to one of his teammates.

He's already shown the ability to see the floor and catch the open man camped out behind the arc. Most of the designed plays for him to shoot take place in the early parts of the game when Aron Baynes or Al Horford need rest, teams don't really see Theis as a threat from deep which leads to easy spot-up opportunities.

The big question surrounding his 215-point frame is will if he withstand the punishment down low that will be administered by guys like 240-pound Marcin Gortat or 238-pound Tristan Thompson. In their Jan. 3 matchup against the Cavs, Theis did well boxing out Thompson, though he never had to contest for rebounds as the ball usually flew over both their heads out of reach so it's tough to gauge how he'll perform when Baynes needs a rest against other bigger and stronger centers.

Stevens tends to only turn to him when things have gone horribly wrong, like against the Pelicans, for example. Baynes struggled to stay on the floor against Anthony Davis and DeMarcus Cousins, forcing Stevens to get bold with his lineups.

For Stevens, it must be great just to have a minimum-level player that doesn't hurt your team every time he's on the floor. Slowly but surely, Theis is earning his head coach's trust. Boston doesn't need Theis to make the game-winning plays for them, they just need him to provide some grit and energy off the bench.

The Celtics have two Marcuses that fall into that role -- Marcus Smart and Marcus Morris -- however, with Theis in the mix it allows Morris to solidify the power forward spot while Theis mans the five. One could argue that some of Boston's best lineups while Kyrie Irving and Horford are resting feature Theis, one in particular has a net rating of 21.6.

When Theis is on the floor with fellow rookies Semi Ojeleye and Jayson Tatum along with Terry Rozier and Shane Larkin, the five have carved out a 112.9 offensive net rating in all of the 27 minutes that they've played together this season. It's a lineup we could see Wednesday night against the Knicks as Stevens continues to go deep into his bench while Smart deals with his injured right hand.

While the Celtics decide what they're going to do with their $8.4 million Disabled Player Exception, expect Theis to make a strong case for himself as to why he should remain a part of Stevens' rotation, and you can also expect Stevens to call his name at times when the Celtics need him the most.