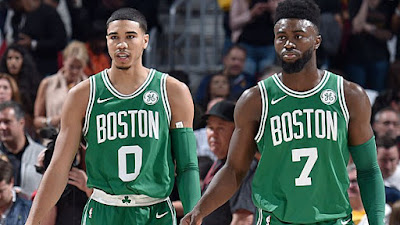 Jaylen Brown and Jayson Tatum will also join teammates Kyrie Irving and Al Horford at NBA All-Star Weekend in Los Angeles next month, as both young bucks have been named to participate in this year's Rising Stars Challenge.

The challenge, formerly known as the rookie game and later the rookie versus the sophomores, includes the league's top first and second year players.

Jaylen Brown, who was not invited to last year's challenge or this season's slam dunk contest for that matter, is one the NBA's most improved players, while averaging 14.2 points (second leading scorer) and 5.6 rebounds per-game for the first place 34-14 Celtics.

Jayson Tatum has shown that he's one of the top rookies of his class, the No. 3 pick in last June's draft is averaging 13.5 points and 5.5 rebounds per-game. The only Celtic to have played all 48 games up to this point, while also leading his team in field-goal percentage (48.8) and the NBA in 3-point average at 45 percent.

Both Brown and Tatum were named to U.S. team, as they'll take on the rest of the World squad in the game's same format from the past few years. Here's the full rosters below: