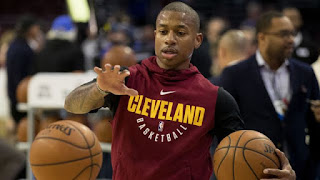 Celtics fans will have to wait until February to see Isaiah Thomas back on the parquet as a member of the Cavaliers.

Cleveland coach Tyronn Lue announced Monday that Thomas will make his Cavaliers debut Tuesday night against the Blazers and will sit out against the Celtics -- the second leg of a back-to-back set. Thomas will come off the bench and will be on a minute-restriction against Portland.

ESPN's Dave McMenamin tweeted out the following, per Thomas:


"My hip is better but I have no rhythm... It feels like I lost my powers," Thomas told reporters. "But once I get back out there it's going to be too hard to hold me back."

Thomas also added, "I'm ready to put the grind forward and give the fans what they want to see and make this season something special."

He tweeted out the following the night of New Year's Eve.

2017 was the best year of my career and the worst year of my life... Let that sink in! God works in mysterious ways and we gonna keep gettin it. The Marathon don’t stop, 2018 watch how I run through YOU!!! #RealKilla
— Isaiah Thomas (@isaiahthomas) January 1, 2018

Kyrie Irving, who was asked about what Thomas did for the Celtics throughout his time in Boston, had a lot to say after Sunday night's win against the Nets.